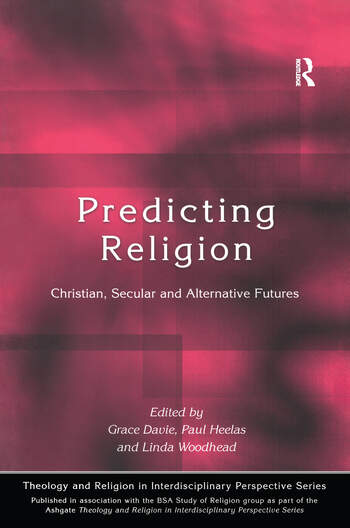 Religion in the contemporary west is undergoing rapid change. In Predicting Religion twenty experts in the study of religion present their predictions about the future of religion in the 21st century - predictions based on careful analysis of the contemporary religious scene from traditional forms of Christianity to new spiritualities. The range of predictions is broad. A number predict further secularization - with religion in the west seen as being in a state of terminal decline. Others question this approach and suggest that we are witnessing not decline but transformation understood in different ways: a shift from theism to pantheism, from outer to inner authority, from God to self-as-god, and above all from religion to spirituality. This accessible book on the contemporary religious scene offers students and scholars of the sociology of religion and theology, as well as interested general readers, fresh insights into the future of religion and spirituality in the west. Published in association with the British Sociological Association Study of Religion group, in the Ashgate Religion and Theology in Interdisciplinary Perspective series.

Contents: Introduction, Linda Woodhead, Paul Heelas and Grace Davie; Secularization theory re-examined: Beyond European and American exceptionalisms: towards a global perspective, José Casanova; On secularization and its prediction: a self-examination, David Martin; The evolutionary principle in the study of religion and society, Olivier Tschannen; Predicting Christianity: The demise of Christianity in Britain, Steve Bruce; Prediction and prophecy in the future of religion, Bryan Wilson; Social networks and religious identity: an historical example from Wales, Paul Chambers; Social networks and personal beliefs: an example from modern Britain, Rob Hirst; A place at high table? Assessing the future of charismatic Christianity, Martin Percy; The decline of the Church in England as a local membership organization: predicting the nature of civil society in 2050, Helen Cameron; After secularism: British government and the inner cities, Jenny Taylor; Predicting alternatives: The self as the basis for religious faith: spirituality of gay, lesbian and bisexual Christians, Andrew K.T. Yip; The Quakers: towards an alternate ordering, Gay Pilgrim; Understanding the spirituality of people who do not go to church, Kate Hunt; 'Witchcraft will not soon vanish from this earth': Wicca in the 21st century, Jo Pearson; Alexis de Tocqueville, Pantheism, and the religion of democracy, S.J.D. Green; Religion on - religion in cyberspace, Anastasia Karaflogka; The paranormal in Swedish religiosity, Ulf SjÃ¶din; Are the stars coming out? Secularization and the future of astrology in the west, Wayne Spencer; An ageing New Age?, Paul Heelas and Benjamin Seel; Index.

'...this really is an interesting and exciting collection...There is much to explore and enjoy....I strongly recommend this book.' Theology '... a surprisingly insightful and accessible collection of essays with wide appeal and broad content... a welcome contribution given its intentional and refreshing boldness.' Journal for Cultural and Religious Theory '... lively and thought-provoking... diversity is the book's strength...' Reviews in Religion and Theology '... the articles are invariably provocative and offer an intriguing commentary on the potential future of various religious movements during the coming decades.' Contact 'Theoretically informed as well as creative, its 19 chapters bravely predict religion's coming shape and texture - 30 to 50 years hence.' Sociology of Religion 'This is an exciting and informative book presenting sociological analyses of the future of religious behaviours in Britain... The essays in this anthology are written by experts and based on primary research with well-defined research populations. The content is interesting and captivating, and the themes have been chosen with vision. The work makes a worthy contribution to the body of knowledge on the social dimensions of Christianity.' Studia Historiae Ecclesiasticae