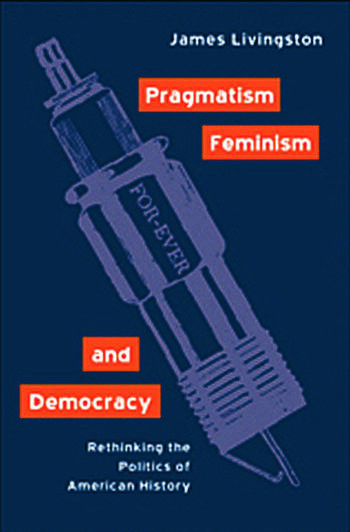 Pragmatism, Feminism, and Democracy: Rethinking the Politics of American History

Pragmatism, Feminism, and Democracy is James Livingston's virtuoso reflection on the period between 1890 and 1930, a primal scene of American history during which a wave of intellectual currents came together--and fell apart--to reorient society.  Tying in critical insights on corporate capitalism, consumer culture, populism, and the American Left, Livingston analyzes the intersections and similarities of pragmatism and feminism to yield an original, provocative blend of historiography, feminist theory, and American intellectual history.

James Livingston is a Professor of History at Rutgers University. He is the author of Pragmatism and the Political Economy of Cultural Revolution and Origins of the Federal Reserve System: Money, Class, and Corporate Capitalism.

"Few scholars think harder than James Livingston. As a result, he makes things easier for the rest of us. A tour de force of intellectual history, cultural analysis, and philosophical critique, [Pragmatism, Feminism, and Democracy] breaks apart many of the moss-backed cliches that have arrested the development of political thought about the emergence of consumer society." -- Andrew Ross, New York University
"This is a challenging, sometimes breathtaking, exploration of the emergence of modern subjectivity throguh the lens of consumer culture and corporate capitalism. Brilliantly blending literary sources with historiographical critique, Livingston persuasively argues for the twin power of feminism and pragmatism to illuminate the emergence of the self in the modern world." -- Alice Kessler-Harris, Columbia University
"This is an enormously stimulating book. It touches on many important issues in both contemporary political cultural criticism, and historiography...it is about the formation of historical subjects...it is about reframing the left critique of American history...Finally, it is a distinctive reading of pragmatism." -- Thomas Bender, New York University
"This volume will enliven a conversation about U.S. history that has become distressingly timid and predictable. James Livingston is independent, forthright, and provocative-one of the history profession's most valuable gadflys." -- David Hollinger, University of California, Berkley

Pragmatism, Feminism, and Democracy: Rethinking the Politics of American History