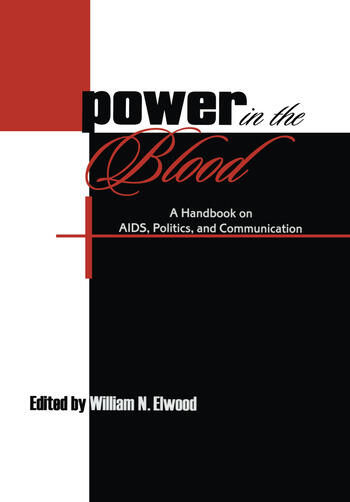 Power in the Blood: A Handbook on Aids, Politics, and Communication

In this single volume, William N. Elwood has gathered potent evidence of the impact that the HIV/AIDS epidemic has had on the world, its communities, and its inhabitants, and he addresses the role of communication in affecting the way in which people respond to AIDS. With a multidisciplinary group of contributors and topics ranging from political rhetoric to interpersonal discourse, Power in the Blood offers a multitude of ways in which to think about power, politics, HIV prevention, and people living with HIV. Readers will be able to use this information in class discussions, program designs, grant applications, and research, as well as in their own lives. With this volume, Elwood makes a thoroughly convincing argument that communication is the key to understanding, treating, and preventing AIDS, and he inspires further action toward the goal of ending the AIDS crisis.

"For this volume, Elwood gathered together an impressive array of scholars to address the intersection of AIDS, politics, and communication....The book's thesis is clearly illustrated....This volume does an admirable job of making important points....I hope that this book marks the first step in increasing connections between public health and communications researchers."
—Journal of Sex Research

"This book is a must-have for anyone interested in, or doing research into, the psychosocial aspects of HIV/AIDS. It is thoughtfully conceived, well written and multi-disciplinary to an unprecedented degree."
—Donna Rochon
Editor, Research Initiative/Treatment Action

"This is a highly approachable book that should be read by anybody interested in the 'state-of-the-art' of sexual behavior and HIV prevention research. Community based organizations (CBOs) can benefit from the practical evaluation frameworks included in many of the chapters addressing HIV prevention efforts; behavioral researchers will benefit from the focus on the interactions between the contexts in which sexual behavior takes place and their outcomes; sex therapists will learn a lot about the didactics of sex and drugs in today's world; and 'at-risk' persons will be able to learn how the challenges of remaining safe relate to the larger contexts of their sexual and drug use networks and the communities in which they live. This comprehensive set of thought provoking papers lays down new paths for breaking through the long-standing barriers that inhibited sexual behavior research and program evaluation."
—David G. Ostrow, MD, PhD
HBHC AIM Project

Power in the Blood: A Handbook on Aids, Politics, and Communication