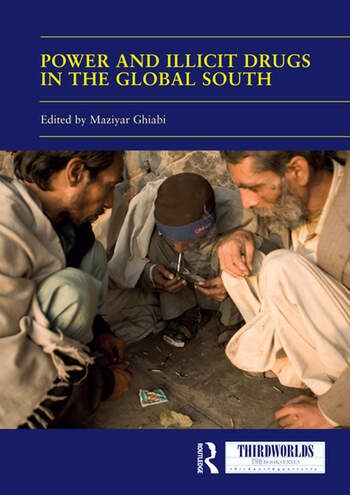 Power and Illicit Drugs in the Global South

More than a hundred years have passed since the adoption of the first prohibitionist laws on drugs. Increasingly, the edifice of international drug control and laws is vacillating under pressures of reform. Scholarship on drugs history and policy has had a tendency to look at the issue mostly in the Western hemisphere of the globe or to privilege Western narratives of drugs and drugs policy. This volume instead turns this approach upside down and makes an intellectual attempt to redefine the subject of drugs in the Global South. Opium, heroin, cannabis, hashish, methamphetamines and khat are among the drugs discussed in the contributions to the volume, which spans from Sub-Saharan Africa to Southeast Asia, including the Middle East, North Africa, Latin America and the Indian Subcontinent. The volume also makes a powerful case for an interdisciplinary approach to the study of drugs by juxtaposing the work of historians, political scientists, geographers, anthropologists and criminologists. Ultimately, this edited volume is a rich and diverse collection of new case studies, which opens up venues for further research.

This book was originally published as a special issue of Third World Quarterly.

1. Introduction: Spirit and being: interdisciplinary reflections on drugs across history and politics Maziyar Ghiabi

Part I: Genealogies of Drugs

2. Decolonising drugs in Asia: the case of cocaine in colonial India James Mills

3. A diplomatic failure: the Mexican role in the demise of the 1940 Reglamento Federal de Toxicomanías Isaac Campos

5. Drug booms and busts: poverty and prosperity in a Nicaraguan narco-barrio Dennis Rodgers

Maziyar Ghiabi is Lecturer in Modern Iranian History at the University of Oxford, UK, and Titular Fellow at Wadham College, University of Oxford. Prior to this position, he was a Postdoctoral Fellow at the Paris School of Advanced Studies in Social Sciences (EHESS), France, and a member of the Institut de Recherche Interdisciplinaire des Enjeux Sociaux (IRIS), France. Maziyar obtained his Doctorate in Politics at the University of Oxford (St Antony’s College) where he was a Wellcome Trust Scholar in Society and Ethics (2013–2017). Besides working on drug policy, Maziyar has published on urban ethnography and history from below.

Power and Illicit Drugs in the Global South