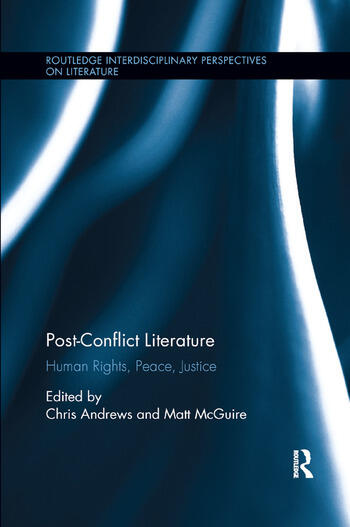 This book brings together a variety of perspectives to explore the role of literature in the aftermath of political conflict, studying the ways in which writers approach violent conflict and the equally important subject of peace. Essays put insights from Peace and Conflict Studies into dialog with the unique ways in which literature attempts to understand the past, and to reimagine both the present and the future, exploring concepts like truth and reconciliation, post-traumatic memory, historical reckoning, therapeutic storytelling, transitional justice, archival memory, and questions about victimhood and reparation. Drawing on a range of literary texts and addressing a variety of post-conflict societies, this volume charts and explores the ways in which literature attempts to depict and make sense of this new philosophical terrain. As such, it aims to offer a self-conscious examination of literature, and the discipline of literary studies, considering the ability of both to interrogate and explore the legacies of political and civil conflict around the world. The book focuses on the experience of post-Apartheid South Africa, post-Troubles Northern Ireland, and post-dictatorship Latin America. The recent history of these regions, and in particular their acute experience of ethno-religious and civil conflict, make them highly productive contexts in which to begin examining the role of literature in the aftermath of social trauma. Rather than a definitive account of the subject, the collection defines a new field for literary studies, and opens it up to scholars working in other regional and national contexts. To this end, the book includes essays on post-1989 Germany, post-9/11 United States, the Israeli-Palestinian conflict, Sierra Leone, and narratives of asylum seeker/refugee communities. This volume’s comparative frame draws on well-established precedents for thinking about the cultural politics of these regions, making it a valuable resource for scholars of

Chris Andrews is a Senior Lecturer at the University of Western Sydney, Australia.

Matt McGuire is a Senior Lecturer at the University of Western Sydney, Australia.