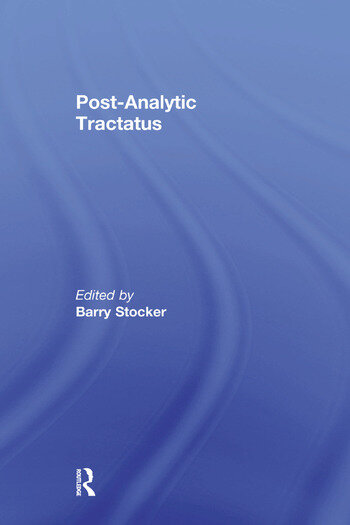 Post-Analytic Tractatus establishes Wittgenstein's early work in the Tractatus Logico-Philosophicus as an invaluable source for exploring current debate on analytic philosophy in its origins, history, limits and relations with European philosophy. Drawing together new work from the leading figures in interpretation of the Tractatus - Conant and Diamond - with work by respected Wittgenstein commentators such as Kremer and Hutto, together with a reprint of a relevant and striking text by Brouwer, this timely collection offers a valuable resource for exploring the Tractatus' connections to approaches other than logical positivism, mathematical logic and formal semantics. Examining links with the work of Leibniz, Kant, Kierkegaard, Schopenhauer, Frege, Russell, James, Heidegger and others, the contributors consider key themes in twentieth-century philosophy including symbols and expression, language and metaphysics, objects and signs, logical form, structure and syntax, limits of philosophical discourse, Idealism and transcendental arguments, distinguishing sense and nonsense, showing and saying in communication, mysticism and transcendence in experience, ethical and aesthetic value, the worlds of solipsism and religion, philosophy as an activity and as a system. Particularly timely in establishing the Tractatus as a source for comparable debates across Continental and Analytic philosophy, this collection will prove of value to scholars of twentieth-century philosophy, Wittgenstein, and Post-Analytic philosophy.

’Much debate has focused around Wittgenstein's later philosophy. A work concentrating on the earlier Tractatus is excellent and timely and this collection should attract critical attention for its innovative character.’ Professor Sean Sayers, University of Kent at Canterbury, UK