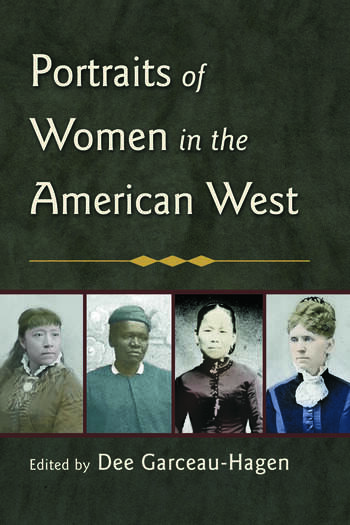 Portraits of Women in the American West

Men are usually the heroes of Western stories, but women also played a crucial role in developing the American frontier, and their stories have rarely been told.

This anthology of biographical essays on women promises new insight into gender in the 19C American West. The women featured include Asian Americans, African-Americans and Native American women, as well as their white counterparts. The original essays offer observations about gender and sexual violence, the subordinate status of women of color, their perseverance and influence in changing that status, a look at the gendered religious legacy that shaped Western Catholicism, and women in the urban and rural, industrial and agricultural West.

Dee Garceau-Hagen is Associate Professor of History and Chair of Women's Studies at Rhodes College in Memphis, Tennessee. She is the co-editor of Across the Great Divide: Cultures of Manhood in the American West (Routledge).

"The personal profiles in Portraits of Women in the American West reveal the fascinating and complex dynamics of women's lives in the American West. This collection's multidimensional and multi-cultural representations open up new and important perspectives on diverse peoples and places. Each chapter holds rewarding insights for attentive readers." -- Clyde Milner, editor of The Oxford History of the American West
"This book is a smorgasbord of delectable essays that introduce new subjects and recast well-known characters of the American West. The confusion, humiliation, and terror of rape and racism, as well as the joy and satisfaction of work, homemaking, and organizing are conveyed in this collection of illuminating and sensitive biographical essays." -- Mary Murphy, author of Mining Cultures: Men, Women, and Leisure in Butte, 1914-41
"These are women who challenged, reordered, and recreated lives that often did not fit conventional cultural expectations of women in the late nineteenth and early twentieth centuries." -- Sandra Schackel, editor of Western Women's Lives: Continuity and Change in the Twentieth Century

Portraits of Women in the American West