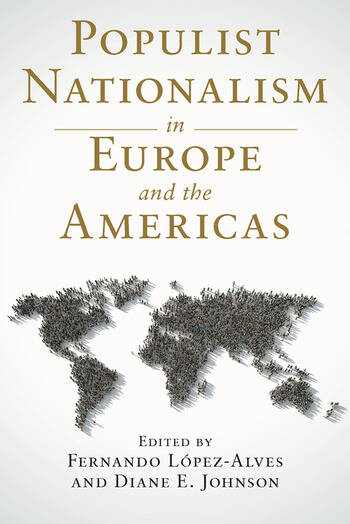 Populist Nationalism in Europe and the Americas

Populist nationalism fuses beliefs that citizens are being exploited by a privileged elite with claims that the national culture and interests are under threat from enemies within or without. Ideologically fluid, populist nationalists decry “out-of-touch” institutions such as political parties and the mainstream press while extolling the virtues of the “people.” They claim that only populists can truly represent the nation and solve its problems, and often call for unorthodox solutions that appeal to the common people.

The recent spread of populist nationalism throughout the world has triggered a growing interest in the subject, led mainly by journalists. The Brexit vote and the election of Donald Trump in the US have provoked a flurry of media coverage in Europe and the Americas, along with parliamentary debates. Some social scientists have sought to explain the resurgence of nationalism and the spread of populism in recent decades, but important questions remain and most of the scholarship has not adequately addressed the fusion of nationalism and populism. It fails to examine the combination of populism and nationalism comparatively, especially the contrast between the more progressive and leftist versions such as those in Latin America, and the more traditional conservative varieties that are gaining strength in Germany, the United Kingdom, and the United States.

This interdisciplinary collection by experts on Europe and the Americas fills this void. The volume examines various experiences with populist nationalism, and offers theoretical tools to assess its future. Some chapters are in-depth country case studies and others take a broader perspective, but all open the door for meaningful comparison.

Introduction
Chapter 1
The Rise of Populist Nationalism in Comparative Perspective: Europe and the Americas
Fernando López-Alves and Diane E. Johnson

Part I: Global Perspectives and Comparative Theory
Chapter 2 Populist Nationalism in Europe and the Americas: Past, Present, and Future
Fernando López-Alves

Chapter 3 Why the Nation Never Really Went Away
Gregory Jusdanis

Chapter 4 Comparing Cabals: The Role of Conspiracy Ideation in Right-Wing Populist Groups in the US and UK
Kristin Haltinner and Jacqueline Hogan

Chapter 11 Populism and Nationalism in US Politics
Mark D. Brewer

Conclusions
Chapter 16 The Future of Populist Nationalism in Europe and the Americas
Diane E. Johnson and Fernando López-Alves

Fernando López-Alves is Professor of Sociology, and Global and International Studies at the University of California Santa Barbara. He has been a researcher and a visiting faculty in several universities in the United States, Europe, and Latin America. He is the author of seven academic books published by prestigious presses in the United States, England, and Latin America as well as four monographs, and more than fifty academic articles in peer-reviewed journals. He has also published dozens of articles in printed media and worked as a foreign correspondent for several prestigious media outlets. López-Alves has been the recipient of three Fulbright awards, an Endowment for the Humanities Grant, two US Institute of Peace Fellowships, an OAS Grant, two UCLA Distinguished Scholar Awards, a University of London Fellowship, and two University of Salamanca Distinguished Fellow Awards. He also serves as an adviser and researcher for several international organizations and on the boards of several non-profits.

is Professor of Politics at Lebanon Valley College in Pennsylvania. She has authored a number of book chapters and articles on the mass media and media–state relations, and on interest group politics, mainly in Argentina and Uruguay. She is co-editor with Fernando López-Alves of Globalization and Uncertainty in Latin America (Palgrave Macmillan, 2007). Johnson is the social sciences editor for the Middle Atlantic Review of Latin American Studies, and a past president of the Middle Atlantic Council of Latin American Studies. She teaches classes in comparative and US politics.

Populist Nationalism in Europe and the Americas