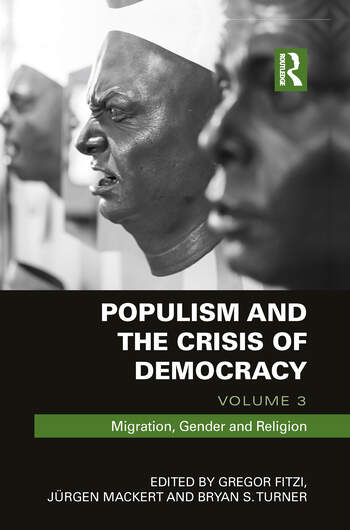 Populism and the Crisis of Democracy: Volume 3: Migration, Gender and Religion

The contributions to this volume Migration, Gender and Religion bring together empirically grounded and theoretically sophisticated case studies of populist responses to what are perceived to be the threats to national survival and sovereignty from ‘uncontrolled’ immigration. The demographic context – declining fertility rates and ageing populations – promotes the belief that high Muslim fertility rates are material evidence of an Islamic threat to the West, to national cohesion and particularly to the safety and dignity of the women of the host community.

Consequently, gender plays an important part in populist ideology, but populist attitudes to gender are often contradictory. Populist movements are often marked by misogyny and by policies that are typically anti-feminist in rejecting gender equality. The traditional family with a dominant father and submissive mother is promoted as the basis of national values and the remedy against social decline. The obsession with women in the public domain points to a crisis of masculinity associated with unemployment, the impact of austerity packages on social status, and the growth of pink collar employment.

Inevitably, religion is drawn into these political debates about the future of Western societies, because religion in general has seen the family and mothers as essential for the reproduction of religion. Christendom has been identified by populists as providing the ultimate defence of the borders of European civilisation against Islam, despite the fact that church leaders have often defended and welcomed outsiders in terms of Christian charity. Once more Christian Europe is the Abendland standing in defiance of a threatening and subversive Morgenland. This volume will be an invaluable reference for students and scholars in the field of political theory, political sociology and European Studies.

Part I: Populism and Migration

1. Populist’s Representation of The People in The Italian Ius Soli Political Debate: The Lega Nord and the Movimento Cinque Stelle

2. The Migration Crisis Between Populism and Post-Democracy

4. Autochthonic Populism, Everyday Bordering and the Construction of ‘The Migrant’

6. ʻGender(Ed) Nationalismʼ of the Populist Radical Right – An Extreme Typicality

7. Non-Western New Populism: Religion, Masculinity and Violence in the East

9. The AKP and the New Politics of the Social: Fragile Citizenship, Authoritarian Populism and Paternalist Family Policies

is Professor of Sociology and co-director of the ‘Centre for Citizenship, Social Pluralism and Religious Pluralism’ at Potsdam University, Germany. His research interests are in sociology of citizenship, political economy, closure theory, collective violence. His most recent publication is The Transformation of Citizenship (Routledge, 2017), in 3 volumes, co-edited with Bryan S. Turner.

is Professor of the Sociology of Religion at the Australian Catholic University, Honorary Professor at Potsdam University and Honorary Fellow in The Edward Cadbury Centre, Birmingham University. In 2015 he received the Max Planck Award from the Max-Planck Society and Alexander von Humboldt Foundation, Germany. He is editor of Citizenship Studies, the Journal of Classical Sociology, and the Journal of Religious and Political Practice. He is also Chief Editor of the Wiley-Blackwell Encyclopedia of Social Theory (2017).

Populism and the Crisis of Democracy: Volume 3: Migration, Gender and Religion