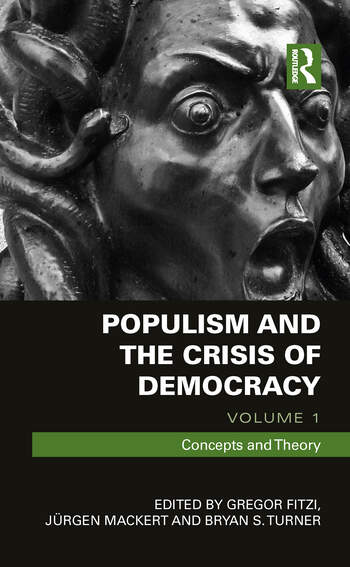 Populism and the Crisis of Democracy: Volume 1: Concepts and Theory

There is no threat to Western democracies today comparable to the rise of right-wing populism. While it has played an increasing role at least since the 1990s, only the social consequences of the global financial crises in 2008 have given it its break that led to UK’s ‘Brexit’ and the election of Donald Trump as US President in 2016, as well as promoting what has been called left populism in countries that were hit the hardest by both the banking crisis and consequential neo-liberal austerity politics in the EU, such as Greece and Portugal.

In 2017, the French Front National (FN) attracted many voters in the French Presidential elections; we have seen the radicalization of the Alternative für Deutschland (AfD) in Germany and the formation of centre-right government in Austria. Further, we have witnessed the consolidation of autocratic regimes, as in the EU member states Poland and Greece. All these manifestations of right-wing populism share a common feature: they attack or even compromise the core elements of democratic societies such as the separation of powers, protection of minorities, or the rule of law.

Despite a broad debate on the re-emergence of ‘populism’ in the transition from the twentieth to the twenty-first century that has brought forth many interesting findings, a lack of sociological reasoning cannot be denied, as sociology itself withdrew from theorising populism decades ago and largely left the field to political sciences and history. In a sense, Populism and the Crisis of Democracy considers itself  a contribution to begin filling this lacuna. Written in a direct and clear style, this set of volumes will be an invaluable reference for students and scholars in the field of political theory, political sociology and European Studies.

This volume Concepts and Theory offers new and fresh perspectives on the debate on populism. Starting from complaints about the problems of conceptualising populism that in recent years have begun to revolve around themselves, the chapters offer a fundamental critique of the term and concept of populism, theoretically inspired typologies and descriptions of currently dominant concepts, and ways to elaborate on them. With regard to theory, the volume offers approaches that exceed the disciplinary horizon of political science that so far has dominated the debate. As sociological theory so far has been more or less absent in the debate on populism, only few efforts have been made to discuss populism more intensely within different theoretical contexts in order to explain its dynamics and processes. Thus, this volume offers critical views on the debate on populism from the perspectives of political economy and the analysis of critical historical events, the links of analyses of populism with social movement mobilisation, the significance of ‘superfluous populations’ in the rise of populism and an analysis of the exclusionary character of populism from the perspective of the theory of social closure.

Introduction: Is There Such a Thing as Populism?

1. Populism as a Conceptual Problem

4. How to Define Populism? Reflections on A Contested Concept and Its (Mis)Use in the Social Sciences

6. ‘We the People’: Liberal and Organic Populism, and the Politics of Social Closure

7. Past Is Prologue: Electoral Events of Spring 2012 and the Old ‘New’ Nationalism in Post-Security Europe

8. The Coterminous Rise of Right-Wing Populism and Superfluous Populations

David A. Snow and Colin Bernatzky

9. Toward A Strategy for Integrating the Study of Social Movement and Populist Party Mobilisation

is Professor of Sociology and co-director of the ‘Centre for Citizenship, Social Pluralism and Religious Pluralism’ at Potsdam University, Germany. His research interests are in sociology of citizenship, political economy, closure theory, collective violence. His most recent publication is The Transformation of Citizenship (Routledge, 2017), in three volumes, co-edited with Bryan S. Turner.

is Professor of the Sociology of Religion at the Australian Catholic University, Honorary Professor at Potsdam University and Honorary Fellow in The Edward Cadbury Centre, Birmingham University. In 2015 he received the Max Planck Award from the Max-Planck Society and Alexander von Humboldt Foundation, Germany. He is editor of Citizenship Studies, the Journal of Classical Sociology, and the Journal of Religious and Political Practice. He is also Chief Editor of the Wiley-Blackwell Encyclopedia of Social Theory (2017).

Populism and the Crisis of Democracy: Volume 1: Concepts and Theory