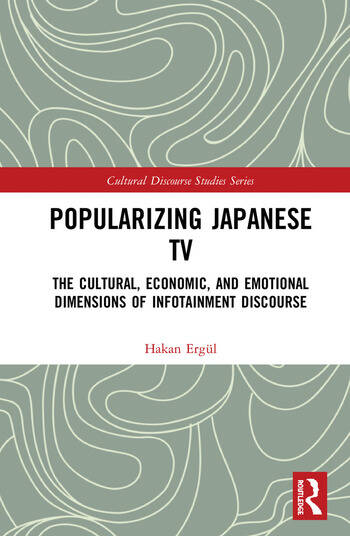 Over the past years, the view has emerged that Japanese TV is dominated by an infotainment mode of discourse. The book extends this view, detailing and interpreting the cultural, economic, and emotional dimensions of this communication phenomenon from an ethnographic perspective. It examines the complex ways in which infotainment works in an advanced capitalist society. As such, this is more than a book about Japan; it is a work that fits within media ethnography and cultural studies, and appeals to readers interested in the question of how television, at the heart of the global media stream, successfully turns into a persuasive, intimate, and powerful member of a televisual audience-family through carefully engineered televisual discourses, linguistic/non-linguistic component, audiovisual strategies, and economic and cultural elements.

Drawing on ethnographic observations in TV stations in two major cities, Sendai and Tokyo, the book reveals several essential components embedded within infotainment discourse. Thus, this book not only provides a panoramic picture of a core phenomenon in Japanese broadcasting since the 2000s but also discusses how both cultural discourses and economic considerations influence contemporary television broadcasting.

1. "No TV. No Life!" The Centrality of Television and Infotainment in Contemporary Japan

3. Television for Sale by Owner: The Political Economy of Infotainment

Hakan Ergül is Associate Professor of Media and Cultural Studies at Hacettepe University, Ankara. He received his MA from Anadolu University, Turkey and his PhD from the Graduate School of International Cultural Studies, Tohoku University, Japan. Between 2013 and 2018 he lived in Rabat, Morocco, where he taught at Mohammed VI Polytechnic University and worked as a communication expert for UNHCR Morocco. Currently he lives in Belgrade, Serbia. He has teaching and fieldwork experience in the areas of media ethnography, media and vulnerable groups, everyday life studies, Turkish and Japanese television, and has published books and articles pertaining to these fields.

'Often the best insights come from the margins. We understand the familiar only when it is made strange. So it is with Hakan Ergül’s excellent, readable, well-organized, scholarly and insightful study. Hybridizing TV genres adapt to Japanese culture –– from sideshow to "wideshow" –– to create a unique emotional-physical space called uchi. Here, an intimate sense of "we" community grows out of commodified infotainment; the cultural out of the commercial. Read this book, and you’ll understand how popular television works. It’s a journey full of "danger and promise" for audiences and analysts alike.' — John Hartley, John Curtin Distinguished Professor, Professor of Cultural Science, Curtin University, Western Australia

'[The] blending of information and entertainment Hakan Ergül examines and explicates in this timely, comprehensive and well-written book. It is of particular value because it not only examines the content of the pervasive "infotainment" shows, but also examines through the author’s first hand fieldwork processes of production and the conception of such shows, their role in the wider consumer economy of Japan, the subtle processes through which they influence the emotional structures of contemporary Japanese society, and very significantly, the way in which, in Ergül’s argument, they contribute to creating and reproducing an admittedly virtual, but nevertheless very real, sense of intimacy between actors/presenters and viewers, and between viewers themselves, who become part of a kind of a virtual community through "participation" in favorite shows. [...] As the study of popular culture has moved to center stage in scholarly discourse, this book shows how it can be extended and deepened, while situating it in the field of Japanese studies and making it accessible to the scholar of comparative forms of popular expression and media.' — John Clammer, Professor of Sociology, O.P. Jindal Global University

'Hakan Ergül’s book opens up an exciting new analysis of Japanese television from a perspective that has not before been approached in the English language. Although couched in the somewhat technical-sounding language of infotainment discourse, there is much to learn about Japan and its viewing public here too. Ergül’s research was with all aspects of Japanese television: viewing it, of course, but also conducting participant observation with those who make it and examining its impact on the regular viewers in one large but local venue in the Tohoku area. The analysis is placed in the context of a range of anthropological and linguistic studies of Japan in a way that demonstrates how the fascinating combination of information and entertainment that we can all watch when we visit Japan cleverly becomes a veritable part of the Japanese home. As the sub-title tells us, the book also reveals much about "the cultural, economic and emotional dimensions" of the process, and I recommend it as a brilliant insight into a quite ubiquitous area of Japanese life.'