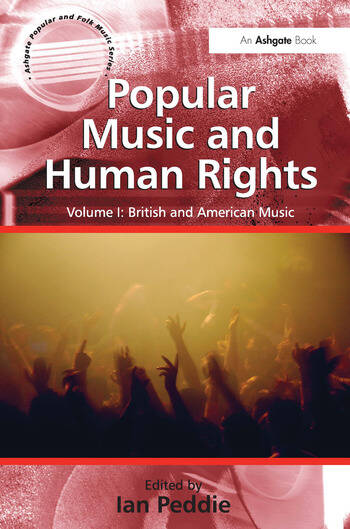 Popular music has long understood that human rights, if attainable at all, involve a struggle without end. The right to imagine an individual will, the right to some form of self-determination and the right to self-legislation have long been at the forefront of popular music's approach to human rights. At a time of such uncertainty and confusion, with human rights currently being violated all over the world, a new and sustained examination of cultural responses to such issues is warranted. In this respect music, which is always produced in a social context, is an extremely useful medium; in its immediacy music has a potency of expression whose reach is long and wide. Contributors to this significant volume cover artists and topics such as Billy Bragg, punk, Fun-da-Mental, Willie King and the Liberators, Hedwig and the Angry Inch, the Anti-Death Penalty movement, benefit concerts, benefit albums, Gil Scott-Heron, Bruce Springsteen, Wounded Knee and Native American political resistance, Tori Amos, Joni Mitchell, as well as human rights in relation to feminism. A second volume covers World Music.

Ian Peddie has taught at Florida Gulf Coast University, the University of Sydney, and West Texas A&M University. His books include The Resisting Muse: Popular Music and Social Protest (Ashgate, 2006) and a study of class in American literature. He has published widely on twentieth-century British and American culture. He is currently editing a collection on music and protest since 1900.

'Anyone interested in the topic of popular music and human rights can begin here. The volume gives an empirically grounded introduction to a variety of perspectives on the topic. It shows how human rights issues in popular music are embedded in everyday identity politics and media consumption. Moreover, the volume illustrates the complexity of music as a medium of expression in creating pleasure and discontent, coherence and unrest, individualism and collectivity.' Fabian Holt, Roskilde University, Denmark