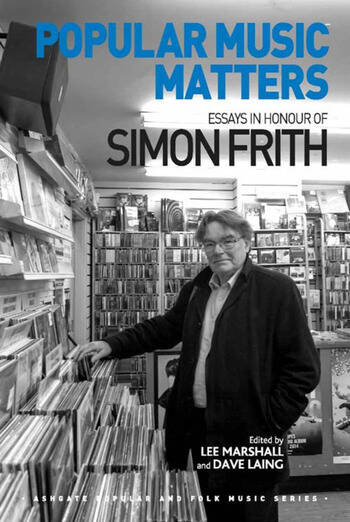 Simon Frith has been one of the most important figures in the emergence and subsequent development of popular music studies. From his earliest academic publication, The Sociology of Rock (1978), through to his recent work on the live music industry in the UK, in his desire to ’take popular music seriously’ he has probably been cited more than any other author in the field. Uniquely, he has combined this work with a lengthy career as a music critic for leading publications on both sides of the Atlantic. The contributions to this volume of essays and memoirs seek to honour Frith’s achievements, but they are not merely ’about Frith’. Rather, they are important interventions by leading scholars in the field, including Robert Christgau, Antoine Hennion, Peter J. Martin and Philip Tagg. The focus on ’sociology and industry’ and ’aesthetics and values’ reflect major themes in Frith’s own work, which can also be found within popular music studies more generally. As such the volume will become an essential resource for those working in popular music studies, as well as in musicology, sociology and cultural and media studies.

Lee Marshall is reader in sociology at the University of Bristol, UK. His research interests centre on issues concerning authorship, stardom and intellectual property, with a particular focus on the music industry. Previous books include Bootlegging: Romanticism and Copyright in the Music Industry (2005), Bob Dylan: The Never Ending Star (2007), Music and Copyright Second Edition (with Simon Frith, 2004) and The International Recording Industries (2012). Dave Laing is Honorary Research Fellow at the Institute of Popular Music, University of Liverpool, UK and an editor of the journal Popular Music History. His books include The Sound of Our Time (1969), One Chord Wonders (1985), The Marxist Theory of Art (1987) and Buddy Holly (2010).

’This book pays fitting tribute to one of the founding figures of popular music studies. Simon Frith’s writing has remained relevant to several generations of scholars and general readers alike because of its sweeping scope, insightful observations and pathbreaking interdisciplinarity. A sociologist by background, Frith worked across existing paradigms for much of his career and his research output is informed as much by his background as a critic and engagement with musical life as by the more traditional academic concerns of critical theory, music industry studies and aesthetics. Popular Music Matters extends the Frithian legacy by focusing on the issues of the day in each of these areas while attending to how the musical is always entwined with the social. This impressive collection of essays by leading popular music scholars and established critics, many of whom worked with or studied under Frith, challenges the orthodoxies of popular music scholarship. Themes range from the sociological to the musicological, from reflections on the current musical landscape to snapshots of the scholar and man. This is an excellent place to start for anyone wishing to assess the impact and import of one of the luminaries of popular music studies.’ John Richardson, University of Turku, Finland ’... as a comprehensive guide to the universe of Frithology, Popular Music Matters passes as excellent with distinction!’ Popular Music ’Laing and Marshall have compiled a collection of essays celebrating Frith's long and multi-faceted career, and engaging with key ideas from the many corners of popular music studies for which Frith's work has been so vital. An essential mix tape.’ Sarah Hill, Cardiff University, UK ’Taking into account his remarkable contributions to a varied range of disciplines, there was no better way of paying homage to him than an edited multidisciplinary collection. The metaphor used by the editors themselves is certainly on the spot. Marshall an