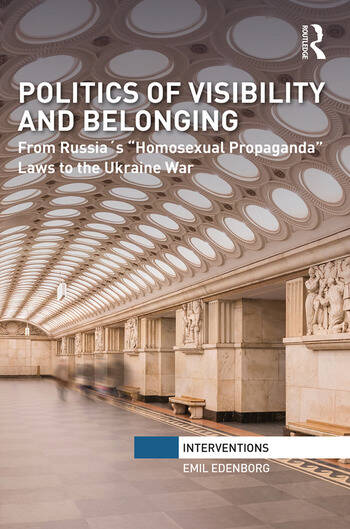 Politics of Visibility and Belonging: From Russia´s “Homosexual Propaganda” Laws to the Ukraine War

In this book, Edenborg studies contemporary conflicts of community as enacted in Russian media, from the ‘homosexual propaganda’ laws to the Sochi Olympics and the Ukraine war, and explores the role of visibility in the production and contestation of belonging to a political community.

The book examines what it is that determines which subjects and narratives become visible and which are occluded in public spheres; how they are seen and made intelligible; and how those processes are involved in the imagination of communities. Investigating the differentiated consequences of visibility, Edenborg discusses what forms of visibility make belonging possible and what forms of visibility may be related to exclusion or violence. The book maps and analyses the practices and mechanisms whereby a state seeks to produce and shape belonging through controlling what becomes visible in public, and how that which becomes visible is seen and understood. In addition, it examines what forms contestation can take and what its effects may be.

Advancing theoretical understanding and offering a useful way to analytically conceptualize the role of visibility in the production and contestation of political communities, this work will be of interest to students and scholars of gender and sexuality politics, borders, citizenship, nationalism, migration and ethnic relations.

Projects of belonging in contemporary Russia

1: Politics of belonging: from speech to visibility

Politics of belonging: the issues at stake

Politics of belonging as visibility contestations

2: Russian media as a space of appearance

A historical overview of media in Russia

The dominant interpretation of the propaganda law

Tensions in the narrative

4: Sochi: the nation on display

Politics of belonging and the spectacular

Contexts and controversies around the Sochi Games

Sochi-2014 as a project of belonging

5: Ukraine: spectacles and specters of warWar, (in)visibility and belonging

Part one: satire and violent cartographies

Conclusion: nothing more to see?

The limits of speech

Arrangements of visibility and the production of belonging

Politics of Visibility and Belonging: From Russia´s “Homosexual Propaganda” Laws to the Ukraine War