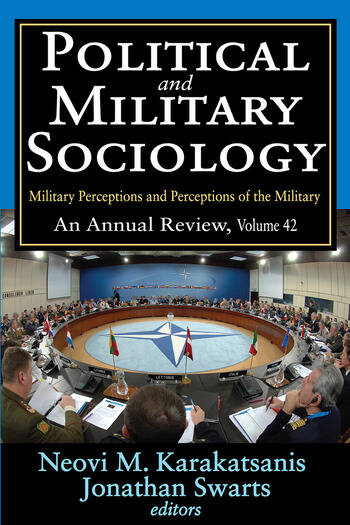 Political and Military Sociology: Volume 42, Military Perceptions and Perceptions of the Military: An Annual Review

This volume of Political and Military Sociology focuses on the perceptions and identities of those serving in the military, using survey or interview data to explore those perceptions. A range of military forces are examined, including those of the United States, Israel, Norway, and Denmark.

The first article, using survey data from Denmark, compares the views of Danish soldiers to civilians. The second article looks at the effects of military education upon the attitudes and values of soldiers. The third article explores Israeli soldiers' attitudes regarding formal military education. The fourth article addresses the impact of Norwegian soldiers' self-identity on military performance.

In a different vein, the survey results of the fifth article show that support for soldiers on active duty in Iraq and Afghanistan does not necessarily translate into support for veterans. Military lawyers in the Israel Defense Forces are the subject of the sixth article. This volume concludes with an article that argues that military service should be offered as a legal policy alternative to incarceration.

Soldier and Civilian Motivation—Different or Similar? A Comparison of Public Service Motivation for Civilians and Military Personnel
Morten Braender and Lotte Bogh Andersen

Trends in Military Education in the IDF: A Case Study of the Tactical Command College
Uzi Ben-Shalom

Legal Advisors in the Armed Forces: Military Lawyers in the Israel Defense Forces as Mediators, Interpreters, and Arbiters of Meaning during Operations
Amichai Cohen and Eyal Ben-Ari

Military Service in Lieu of Imprisonment: Voices from the Inside
Travis Milburn, David C. May, and Peter B. Wood

Political and Military Sociology: Volume 42, Military Perceptions and Perceptions of the Military: An Annual Review