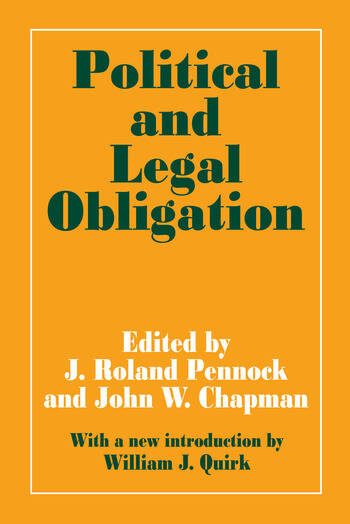 At a point in history marked by dramatic challenges to the existing political and social order, the question of legal and political obligation emerges as a focal point of international concern. Amid the clamor for radical change in the established order, theories of political obligation demand renewed examination. In this volume, eighteen leading specialists in the legal, philosophical, and political science aspects of the question offer their views on this timely topic.

Part I examines the nature of moral, legal, and political obligation. The first essay presents a set of definitions that denies the very existence of obligation. While the second essay disagreeing particularly with respect to the relationship of political to moral tenets, and the third discussing the highly complex interplay between law and morality. The following essay approaches obligation as existing in the context of an established political and legal system and stresses the importance of evaluating the negative consequences of challenges to the law as well as those arising from the absence of challenges. The next paper maintains that political obligation is so complex that its very existence depends upon rational deliberation in particular contexts. The fifth, explores four significant theories but accepts only the one based on the broadest definition of obligation. While the final essay in this part considers political obligation a unique and generalized moral obligation.

Part II takes up the conditions of obligation and of obedience. The first essay in this part discusses the conditions necessary to generate a "felt obligation." The second paper, concentrates on exposing key obstacles to empirical proof that behavior is or is not motivated by "felt obligation." While the third draws upon a large body of literature and court decisions dealing with compliance to the law. The forth essay is a case study of Rome probes the role of obligation during that city's seven centuries of existence without a police force, and the ultimate breakdown of the system. Against the background of the thinking of Hobbes, Hume, Rousseau, and particularly Aristotle, the final essay in this section propounds the theory that any specific form of government has a direct bearing on the obedience of those governed.

Part III highlights ethical considerations that arise out of civil disobedience. The first essay proposes a rather restrictive definition of civil disobedience, and then embarks on a surprising examination of his subject in the light of the traditional arguments for "just war." Following that a broader examination of disobedience, emphasizing a contextual approach and applying as a test the likelihood of public good that will result from disobedience is explained in the second paper. The third, points out the inadequacy of many traditional tests and definitions of civil disobedience, and warns against possible oversimplification that conceals significant issues that warrant exposition. While the forth evolves a theory that limits the obligation of alienated residents. Immediately following this the next essay explores civil disobedience in the unusual context of the totalitarian regime. In the final chapter, the essays consider the ideas and thought of Gandhi and their relevance to Western politics.

Scholars and students in the areas of law, philosophy, and political science will find this volume a vital addition to their libraries..