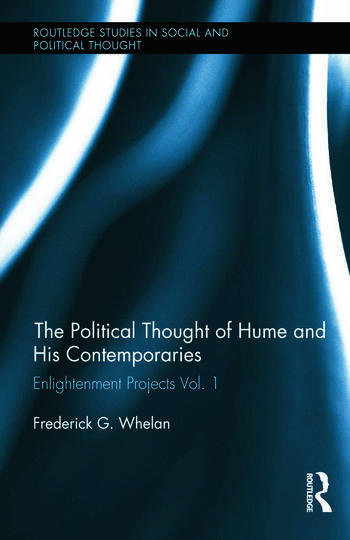 Intended for scholars in the fields of political theory, and the history of political thought, this two-volume examines David Hume's Political Thought (1711-1776) and that of his contemporaries, including Smith, Blackstone, Burke and Robertson.  This book is unified by its temporal focus on the middle and later decades of the eighteenth century and hence on what is usually taken to be the core period of the Enlightenment, a somewhat problematic term.

Covering topics such as property, contract and resistance theory, religious establishments, the law of nations, the balance of power, demography, and the role of unintended consequences in social life, Frederick G. Whelan convincingly conveys the diversity--and creativity--of the intellectual engagements of even a limited set of Enlightenment thinkers in contrast to dismissive attitudes, in some quarters, toward the Enlightenment and its supposed unitary project.

contains six in-depth studies of issues in eighteenth-century political thought, with an emphasis on topics in normative theory such as property rights, the social contract, resistance to oppressive government, and religious liberty. The central figure is David Hume, with substantial attention to Edmund Burke, Adam Smith, and others in the period. The introduction situates the studies in the Enlightenment and considers interpretations of that movement.

1. Property as Artifice: Hume and Blackstone  2. Hume and Contractarianism  3. The Place of Contract in Burke’s Political Theory  4. Grotian Resistance Theory from Hume to Burke  5. Time, Revolution, and Prescriptive Right in Hume’s Theory of Government  6. Church Establishments, Liberty, and Competition in Religion  7. Vattel’s Doctrine of the State  8. Robertson, Hume, and the Balance of Power  9. Hume on the Laws of Nations, Chastity, and Double Standards  10. "Contrary Effects" and the Reverse Invisible Hand in Hume and Smith  11. Population and Ideology in the Enlightenment  Conclusion

Frederick G. Whelan is Professor of Political Science and Associate Dean for Undergraduate Studies at the University of Pittsburgh. He is a leading scholar of Enlightenment political thought.