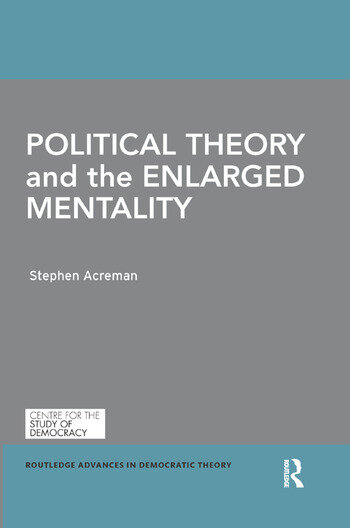 Political Theory and the Enlarged Mentality

In this book, Stephen Acreman follows the development and reception of a hitherto under-analyzed concept central to modern and postmodern political theory: the Kantian ein erweiterte Denkungsart, or enlarged mentality.

While the enlarged mentality plays a major role in a number of key texts underpinning contemporary democratic theory, including works by Arendt, Gadamer, Habermas, and Lyotard, this is the first in-depth study of the concept encompassing and bringing together its full range of expressions. A number of attempts to place the enlarged mentality at the service of particular ideals–the politics of empathy, of consensus, of agonistic contest, or of moral righteousness–are challenged and redirected. In its exploration of the enlarged mentality, the book asks what it means to assume a properly political stance, and, in giving as the answer ‘facing reality together’, it uncovers a political theory attentive to the facts and events that concern us, and uniquely well suited to the ecological politics of our time.

1.1 ‘Subjective universality’ and the Kantian aesthetic

1.2 The ‘enlarged mentality’ as a collective epistemology

1.4 The object in reflective judgement

2. The Enlarged Mentality in Political Theory

2.1 Readings of the Sensus Communis

2.2 Hannah Arendt and the political relevance of enlarged thought

2.4 Sociability and the cultivation of taste

2.5 The merging of spectatorship and action

2.7 The balance of spectatorship and action in a healthy public sphere

2.8 Storytelling and the perspective of the world

3. Judging from the perspective of the world

4. An Enlarged Mentality for the present: facing reality together

4.2 The Human Condition and the world ‘in-between’

4.3 Beyond Arendt’s critique of modernity

4.4 World alienation and populating the space between men

Stephen Acreman is a Teaching Fellow at the University of Nottingham, Malaysia and a Visiting Lecturer at the University of Otago, New Zealand. Stephen received his Ph.D. in Political Theory from Monash University, Australia. His research interests are in the history of political and social thought, with a focus on political ecology.

Political Theory and the Enlarged Mentality