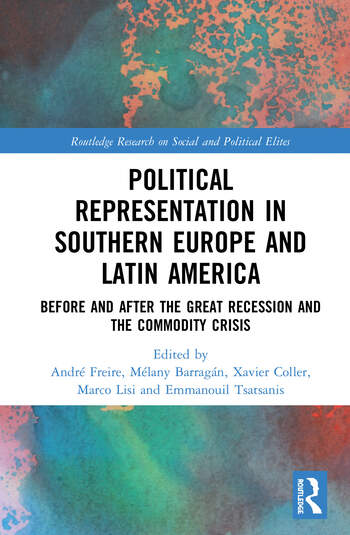 This collective volume - with contributions from experts on these regions - examines broader questions about the current crises (The Great Recession and The Commodity Crisis) and the associated changes in political representation in both regions.

This book will be of key interest to scholars and students of political elites, political representation, European and Latin American politics/studies, and more broadly to comparative politics.

Introduction: The impact of the Great Recession and the Commodity Crisis upon Political Representation in Southern Europe and Latin America

1. Southern Europe and the Eurozone Crisis: Political Representation, Party System Characteristics and the Impact of Austerity

2. The Study of Political Representation in Greece: Towards new patterns following the economic crisis?

3. Modes of Representation and Parliamentary Roles in Italy

4. Political Representation Studies in Portugal, before and after the ‘Great Recession’ Legitimation and the Ideological Linkages between Voters and their Representatives

5. It is Not the Economy: How Spanish Established Political Elites Understand the (Political) Crisis and Its Effects

6. The Social Profile of the New Political Elites in Spain

7. Methodological Challenges in the Study of Political Elites: Some reflections from Southern Europe

8. Latin American Politics Before and Beyond the Commodity Crisis: Representation, Institutional Design, and Political Cycles

10. Political Representation Studies in Ecuador: Links between Elites and Voters

André Freire is Full Professor at the ISCTE-IUL, University Institute of Lisbon, and CIES-IUL, Portugal.

is Researcher at the University of Salamanca, Spain.

is Assistant Professor at the Nova University Lisbon, FCSH-UNL, and IPRI-UNL, Portugal.

is Senior Researcher at CIES-IUL, and Invited Assistant Professor at the ISCTE-IUL, University Institute of Lisbon, Portugal.