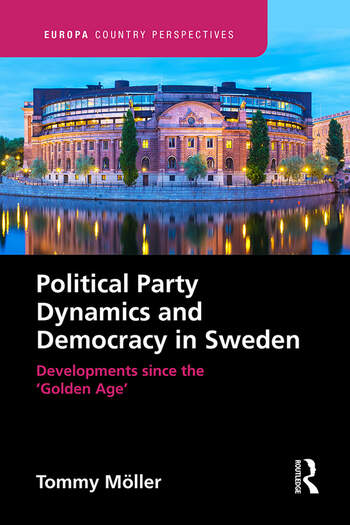 Political Party Dynamics and Democracy in Sweden:: Developments since the ‘Golden Age’

Sweden has often been described as a democratic forerunner, with one of the world's most stable party systems and with a well-functioning parliamentary system. However, the political landscape in Sweden has undergone a rapid change in recent years. The institutions of the political system – not least political parties – appear from a historical perspective to have become partly dysfunctional. The previously stable party system has become unstable. Consequently, it has become more difficult to form governments, and more difficult for governments to govern. The famous culture of consensus has been replaced by a harsher and more confrontational political climate; the tone in political debate has become more aggressive.

During the so-called `golden age' of the party system, which lasted for a few decades from the middle of the twentieth century, parties could successfully mobilize broad and well-defined social interests with strong collective identities. Now, other conditions apply that have dramatically changed the role of parties in the democratic process. Parties have gone from being member-based popular movements to becoming professionalized voter-orientated campaign machines. Short-sightedness and a focus on median voters mean that the established parties have become increasingly similar, and populist parties have had great success in recent decades as a consequence.

This volume, aimed at political scientists and those interested in discussion and analysis of Swedish political party dynamics, focuses on political parties in Sweden, how they have changed and what the changes mean in a wider sense.

1. What is really happening with political parties? Sweden as a critical case for testing the decline thesis

3. The problem of aggregation

5. Realization of the will of the people

8. Politics from above comes from below: democratic implications of the parties' professionalized campaign methods

9. The future of political parties and democracy

Tommy Möller is Professor of Political Science at Stockholm University, Sweden. He has previously taught at the Department of Government at Uppsala University and has been engaged as an expert in various government committees. In his research, in addition to his interest in political parties, he has focused especially on political history, political leadership and constitutional politics. Möller is a well-known expert commentator on Swedish domestic politics in the Swedish media.

Political Party Dynamics and Democracy in Sweden:: Developments since the ‘Golden Age’