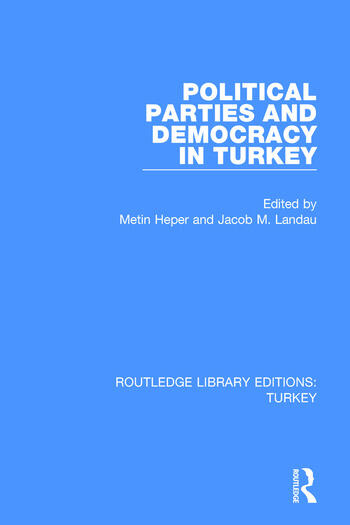 Political Parties and Democracy in Turkey

Since the establishment in 1945 of a constitutional democracy, political parties have figured prominently in Turkish politics. This book, first published in 1991, examines the role they have played. Key features of the political culture of the Turkish republic have created dilemmas for multi-party democracy: Atatürkism still exerts a powerful influence on the country’s bureaucratic and military elites. With their notion of ‘responsible leadership’ and of democracy as rational intellectual debate in pursuit of the ‘best’ policy, they have expected an unrealistic degree of idealism and statesmanlike behaviour from the leaders of political parties. Three times, in 1960, 1971 and 1980, the military has intervened in politics – on the third occasion to undertake wholesale constitutional and legal restructuring aimed at producing ‘sensible’ politicians. Given these ambiguous circumstances, what role have the political parties themselves played in the promotion and functioning of democracy in Turkey, and what are their attitudes to the issues involved? This collection of essays discusses political parties since the foundation of the Turkish Republic in 1923 until the 1990s. With contributions from leading political scientists and historians of modern Turkey, it is indispensable reading for all those concerned with the country.

Political Parties and Democracy in Turkey