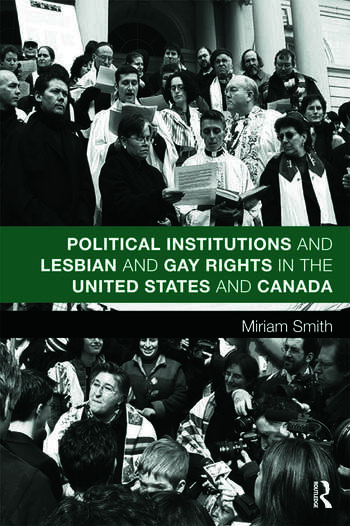 Lesbian and gay citizens today enjoy a much broader array of rights and obligations and a greater ability to live their lives openly in both the U.S. and Canada. However, while human rights protections have been exponentially expanded in Canada over the last twenty years, even basic protections in areas such as employment discrimination are still unavailable to many in the United States. This book examines why these similar societies have produced such divergent policy outcomes, focusing on how differences between the political institutions of the U.S. and Canada have shaped the terrain of social movement and counter-movement mobilization. It analyzes cross-national variance in public policies toward lesbians and gay men, especially in the areas of the decriminalization of sodomy, the passage of anti-discrimination laws, and the enactment of measures to recognize same-sex relationships.

Miriam Smith is Professor in the School of Public Policy and Administration at York University, Toronto, Canada. She is the author of Lesbian and Gay Rights in Canada: Social Movements and Equality-Seeking, 1971-1995 (1999) and co-editor with Michael Orsini of Critical Policy Studies  (2007).

"This arresting book historically interrogates the relationship between sexuality and social policy development in the United States and Canada. A must read for scholars of sexuality and of political development, Smith’s study helps us to see how conflict over cultural issues can map through institutional developmental dynamics and then how these dynamics can reformulate cultural struggles. The book also provides a finely grained explanation of the interplay among legal-institutional development, the discourse of rights, and lesbian and gay movement politics. Political Institutions and Lesbian and Gay Rights in the United States and Canada is the definitive analysis of the relationship between sexuality and political development – and shows clearly why this relationship must be understood by any serious student of politics."

"No serious student of both social movements and democratic constitutionalism can fail to profit from this pathbreaking comparative study. Anyone committed to human rights in general and gay rights in particular will better understand how and why the United States has in some areas fallen so far behind other constitutional democracies once inspired by the American example."

Edwin D. Webb Professor of Law, New York University, author of The Case for Gay Rights and Women, Gays, and the Constitution

"Miriam Smith takes the evolution of gay and lesbian rights in Canada and the United States in a new direction. Through her careful analysis of the institutions through which policies unfold over time, she enriches our understanding of how and why the two countries differ today."

"Smith’s thoughtful examination of the greater recognition offered to gays and lesbians in Canada versus the United States provides a compelling case for why political institutions really do matter. Policy legacies, federalism, the separation of powers, the role of courts and political timing all play a part in this fascinating account of LGBT rights. Moving beyond public opinion and religious culture, Smith provides an incisive analysis of sexuality as a key system of power that is more comprehensively understood through American political development and new institutionalist frameworks."