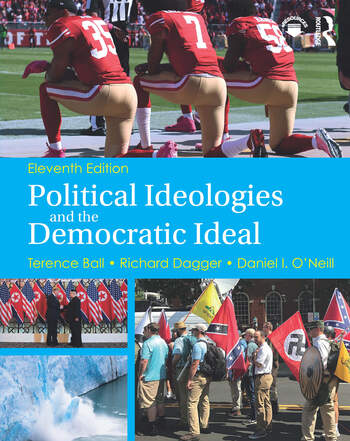 Political Ideologies and the Democratic Ideal

Political Ideologies and the Democratic Ideal analyzes political ideologies to help readers understand individual ideologies, and the concept of ideology, from a political science perspective. This best-selling title promotes open-mindedness and develops critical thinking skills. It covers a wide variety of political ideologies from the traditional liberalism and conservatism to recent developments in liberation politics, the emergence of the Alt-Right, and environmental politics.

NEW TO THIS EDITION

RICHARD DAGGER earned his Ph.D. from the University of Minnesota and has taught at Arizona State University and Rhodes College, and the University of Richmond, where he is currently the E. Claiborne Robins Distinguished Chair in the Liberal Arts. He is the author of many publications in political and legal philosophy, including Civic Virtues: Rights, Citizenship, and Republican Liberalism (1997) and Playing Fair: Political Obligation and the Problem of Punishment (2018).

DANIEL I. O’NEILL holds a Ph.D. from the University of California at Los Angeles and is now Associate Professor of Political Science at the University of Florida. He is the author of The Burke-Wollstonecraft Debate: Savagery, Civilization, and Democracy (2007), coeditor of Illusion of Consent: Engaging with Carole Pateman (2008), and author, most recently, of Edmund Burke and the Conservative Logic of Empire (2016) .

"The fact that this book enters its 11th edition says a lot. It’s well-done, well-written, and quite comprehensive. This edition adds new coverage of global populism, illiberal regimes, ISIS, new material on Xi Jinping’s thought, as well as more on free trade, the Alt-Right, transgender rights, the rights of Native Peoples, and so on." — Ralph G. Carter, Professor of Political Science, Texas Christian University

"Terence Ball, Richard Dagger and Daniel I. O’Neill offer a superb analysis of political ideologies with thoughtful and compelling contemporary examples. The text invites students into the contemporary debates about political ideologies, and provides an opportunity to critically examine and challenge their own political views and understandings. The authors' ability to balance the theoretical ideas with practical applications makes the eleventh edition even better than earlier versions of the text." — Michael Cairo, Ph.D., Professor of Political Science, Transylvania University

"It is a pleasure to see this classic volume admirably updated with perceptive new discussions of pressing topics such as populism, illiberal democracy, fascism, the alt-right, democratic socialism, the "Me-too" movement, to name but a few. These topics are engaged not simply as add-on novelties, but carefully interrogated in terms of the central concerns of the volume regarding ideology and the prospects for democratic life." — Stephen K. White, James Hart Professor, Department of Politics, University of Virginia

Political Ideologies and the Democratic Ideal