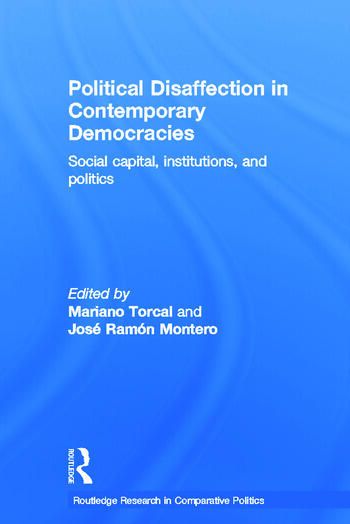 Citizens of many democracies are becoming more critical of basic political institutions and detached and disaffected from politics in general.

This is a new comparative analysis of this trend that focuses on major democracies throughout Latin America, Asia and Central Europe. It brings together leading scholars to address three key areas of the current debate:

This is a highly relevant topic as representative democracies are coming to face new developments. It deals with the reasons and consequences of the so called ‘democratic deficit’ in a systematic way that enables the reader to develop a well-rounded sense of the area and its main debates.

This book is an invaluable resource for all students of political science, sociology, cultural studies and comparative politics.

3. The Multidimensionality of Political Support for New Democracies:

5. Democracy and Involvement: The Benevolent Aspects of Social Participation

6. Understanding the Relationship between Social Capital and Political Disaffection in the New Post-Communist Democracies

Ola Listhaug (The Norwegian University of Science and Technology, Trondheim)

12. Political Participation, Information and Accountability: Some Consequences of Political Disaffection in New Democracies

13. Some Basic Conclusions About Political Disaffection in Contemporary Representatives Democracies