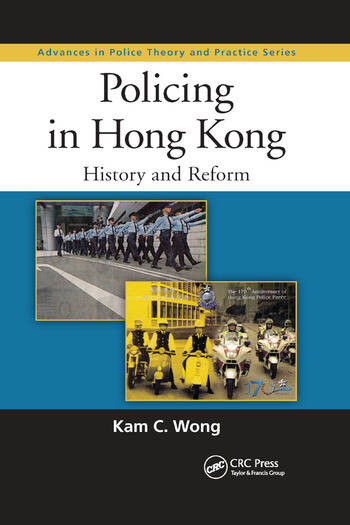 The HKP (Hong Kong Police), ‘Asia’s Finest’, is a battle-tested professional organization with strong leadership, competent staff, and deep culture. It is also a continuously learning and reforming agency in pursuit of organisational excellence. Policing in Hong Kong: History and Reform is the first and only book on the development of the Hong Kong Police from an inside out and bottom up perspective. Written by a scholar and veteran of the HKP, it is an amalgamation of indigenous theory and supporting data.

Overall, the book questions previously accepted colonial history, and in doing so, contributes to our understanding of challenges and opportunities facing HKP after the reversion of political authority from England to China.

Professor Kam C. Wong teaches at the Department of Criminal Justice, Xavier University, Cincinnati, Ohio, where he once was a chairperson. Concurrently, he is a faculty fellow at the School of Criminal Justice, SUNY–Albany, New York. An Inspector of Police with the Hong Kong Police, Dr. Wong was awarded the Commissioner’s High Commendation. Currently, he is an Honorary Fellow at the Center for Criminology at Hong Kong University. Professor Wong is a legal consultant to the Immigration and Refugee Board of Canada on Chinese law issues; an expert consultant to U.K. Beirut Police Integrity Workshop, the United Nations Office on Drugs and Crime; an expert observer at the United Nations Congress on the Prevention of Crime and the Treatment of Offenders; and an expert consultant to HKP and Ministry of Public Security, People’s Republic of China.