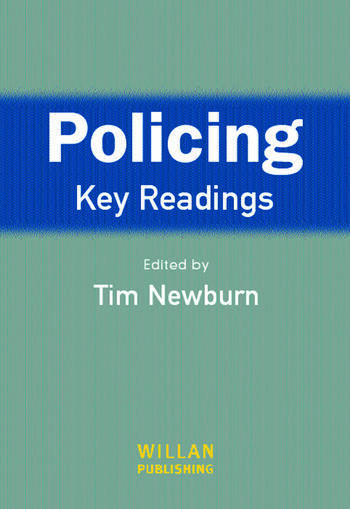 Policing has developed as an increasingly important and popular subject of study at colleges and universities in western societies, either as a subject in its own right or as part of broader courses in the field of criminology and criminal justice. This book aims to bring together the key readings which constitute the core of policing studies, setting them within the necessary theoretical, social and political context, and providing an explanatory commentary.

The book is divided into five major sections:

• the history of policing: focusing on the emergence of the police in the USA and the UK, but including several readings on other policing systems;

• the role of the police: in particular the balance of tension between crime fighting, order maintenance and other forms of service, and how these arguments have developed historically;

• organisation and culture: how these are theorised and understood, considering arguments about the need for reform;

• approaches to policing: from crackdowns and the ‘broken windows’ theory, through zero tolerance to community policing;

• policing futures: debates about the future shape of policing, including work on risk, actuarialism and post-Keynesianism, and the debate on how current trends are to be understood.

'This volume offers a definitive and invaluable resource for students (and scholars) who wish to learn about the development and content of policing research. It is a fitting companion to Tim Newburn's 2003 Handbook of Policing, which provided a state-of-the-art collection of contemporary papers on the main aspects of contemporary policing in the UK. Tim Newburn's editorial introductions to each section of both volumes are exceptionally judicious and helpful, drawing out the core points of each contribution and its relationship to the others. Policing: Key Readings offers not only a wealth of material for students new to the field, but an opportunity to assess the development and future(s) of policing research. For me, studying the papers selected from a range of nearly a half-century repeatedly gave me a frisson of shocked pleasure at rediscovering the quality of the classics of the field, which I have referred to but not properly re-read for many years.
- Professor Robert Reiner (LSE), in Policing and Society (2006)