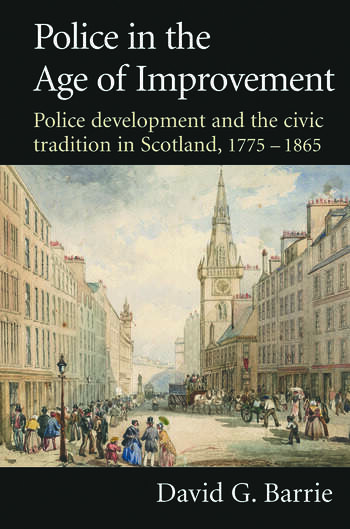 Police in the Age of Improvement

The study of police history in Scotland has largely been neglected. Little is known about the Scottish police's origins, development and character despite growing interest in the machinery of law enforcement in other parts of the United Kingdom. This book seeks to remedy this deficiency.

Based on extensive archival research, its central aim is to provide an in-depth analysis of the economic, social, intellectual and political factors that shaped police reform, development and policy in Scottish burghs during the 'Age of Improvement'. The key issues addressed include: the workings of traditional forms of law enforcement and why these were increasingly deemed to be unsuitable by the late eighteenth and early nineteenth centuries; why, and in what ways, the pattern, nature and origins of police development in urban Scotland differed from elsewhere in Britain; in what ways the Scottish police model compared and contrasted with other British models; the impact of police reform on urban governance and the struggle between social groups for control of the local state; the concerns and priorities behind police policy.

In addressing these questions, Police in the Age of Improvement moves beyond many of the 'problem-response' interpretations which have preoccupied many police historians, and locates reform within the wider contexts of urban improvement, municipal administration and Scottish Enlightenment thought. It will be essential reading for anyone interested in the history of policing, urban management and social change in the late eighteenth and nineteenth centuries.

David Barrie is a Lecturer in History at the University of Western Australia. His research interests include eighteenth and nineteenth century criminal justice history, urban history, and the history of masculinity.

Police in the Age of Improvement