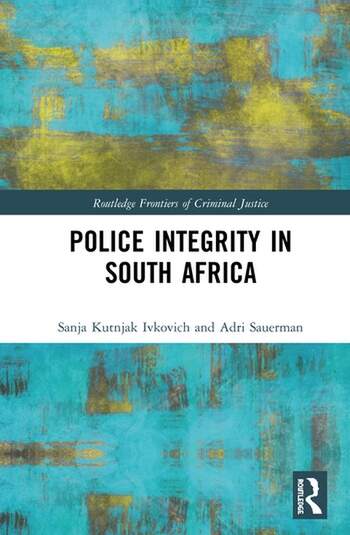 Policing in South Africa reached notoriety for its extensive history of oppressive law enforcement. In 1994, as the country’s apartheid system was replaced with a democratic order, the new government faced the significant challenge of transforming the South African police force into a democratic police agency—the South African Police Service (SAPS)—that would provide unbiased policing to all the country’s people. More than two decades since the initiation of the reforms, it appears that the SAPS has rapidly developed a reputation as a police agency beset by integrity challenges.

This book offers a unique perspective by providing in-depth analyses of police integrity in South Africa. It is a case study that systematically and empirically explores the contours of police integrity in a young democracy. Using the organizational theory of police integrity, the book analyses the complex set of historical, legal, political, social, and economic circumstances shaping police integrity. A discussion of the theoretical framework is accompanied by the results of a nationwide survey of nearly 900 SAPS officers, probing their familiarity with official rules, expectations of discipline within the SAPS, and their willingness to report misconduct. The book also examines the influence of the respondents’ race, gender, and supervisory status on police integrity.

Written in a clear and direct style, this book will appeal to students and scholars of criminology, policing, sociology, political science, as well as to police administrators interested in expanding their knowledge about and enhancing police integrity.

Chapter 2: The Origin and Functions of the Police in South Africa: From Colonialism to Democracy

Chapter 3: Transition to a Police Service: From Enforcer to Protector

Chapter 6: Curtailing the Code of Silence

Chapter 8: Gender (In)Equality within the SAPS

Sanja Kutnjak Ivkovic is a Professor at the School of Criminal Justice, Michigan State University. For more than two decades, her research has focused on comparative and international criminology, criminal justice, and law. She received the 2017 Mueller Award for Distinguished Contributions to International Criminal Justice.

is a legal counsel in the mineral, energy, trading and commerce industries as well as a former Fulbright- and current independent scholar. As legal counsel, he navigates the legal and governance intricacies of several African and European commercial systems. His research and publications focus on international criminology, criminal justice, and law.

is a Senior Researcher in the Justice and Violence Prevention Programme at the Institute for Security Studies, and a Research Associate at the Centre of Criminology, University of Cape Town. He has over fifteen years’ experience researching policing and related subjects in South Africa.

is Emeritus Professor of Criminal Justice at the University of North Dakota, USA. He has been a recipient of a Fulbright Scholarship to South Africa and two National Endowment for the Humanities Fellowships. His research interests focus on policing in transitional societies.

is the Head of Justice and Violence Prevention Programme at the Institute for Security Studies (ISS), an independent organization that provides authoritative policy research and technical support to enhance human security across Africa (www.issafrica.org). He leads a team of people who work to better understand, respond to and prevent violence, and strengthen the criminal justice system in South Africa.

"This is a compelling ‘must-read’ for anyone interested in understanding the complexity of South Africa. In its own words ‘the book offers a unique, in depth and systematic empirical exploration of the contours of police integrity in South Africa’. As such it should be made obligatory reading material for all persons in the police engaged in planning and research. This book underscores the need for and importance of understanding the historical development of the police in South Africa and the challenges it faces in the future to reaching its ultimate goal as a service for all people."

"Policing Integrity pulls no punches in establishing the state of South African policing. Police misconduct is widespread, endemic, deeply embedded, routinely accepted, endorsed, and encouraged at all levels – including by governments. All South Africans are victimised. Solutions will be hard to find and will be even harder to realise. Extraordinary leadership is required."

"When renowned scholars get together to co-author a book, it is usually an endeavour worthy of attention. In the case of Policing Integrity in South Africa, this effort produced an invaluable addition to the study of policing from a comparative perspective in countries experiencing political turmoil and transitions. In addition, it is a must-read for scholars of policing, as it touches upon the most profound concepts embedded in this profession, namely the interplay between politics, the public, and effective policing."

"This is a major book on the transformation of policing and society over time. It excels at placing the analysis of policing in a political framework, at unveiling long term trends in the transformation of societies and policing, and, last but not least, at understanding policing as a means of political domination (cf. Max Weber) and a tool for political abuse. It also appropriately situates policing in the context of extreme levels of interpersonal violence, which in part derives from the regime’s establishment of the apartheid. It is not only a contribution to the study of policing in South Africa, but in divided countries in general. The focus on integrity is not only useful in order to rebalance the study of trust and legitimacy of police: accounting for those requires that the performance of policing is studied, and such performance is first and foremost destroyed by the lack of integrity in a large sense, and the use of overt violence in the framework of policing."

, Professor of Policing, University of Grenoble-Alpes

"This book provides a detailed, thought-provoking look at police integrity in South Africa. The authors provide an excellent historical overview of the South African police. They also describe how social, cultural, and political changes in South Africa over time influenced changes within police organisational structure, as well as how the South African police are perceived by the citizens they serve. An entire chapter is devoted to a discussion of the internal control mechanisms related to police misconduct. The authors include important findings and policy implications from a recent study they conducted on police integrity in South Africa. This book is a must-read for students, scholars, and policing professionals interested in police integrity from a comparative perspective."

"Police integrity has been the focal concern for many researchers, police administrators, and policy makers, particularly in transitional societies where old and new cultures and policies clash, creating an environment conducive to misconduct and corruption. Although South Africa’s transformation from apartheid to democracy is viewed as one of the most important political events of the 1990s, the country has unfortunately suffered a steady decline in public confidence in the police. Kutnjak Ivkovich and colleagues’ book on police integrity in South Africa makes a significant and valuable contribution to the literature by tracking the historical development of policing and, most importantly, identifying factors related to the problem of police integrity in the transitional democracy. This book is not only theoretically rich but also exceptionally well-written.

The central theme of the book is that variation in police integrity is influenced by a broad range of historical, social, political, and economic factors. Drawing upon survey data collected from the police forces during two time periods, the authors provide a comprehensive examination of the organizational theory of police integrity along the four key dimensions of the framework, including the existence and enforcement of policies and rules, the approaches of misconduct control, the taming of the code of silence, and the influence of the large environment. The book offers the reader a new way of thinking about police misconduct and corruption by concentrating on theorising and measuring police integrity.

Overall, the book represents a compelling and thoughtful examination of the theoretical arguments and empirical findings regarding police integrity in a relatively new democracy. Given the authors’ extensive teaching and research experience in the subject area, Police Integrity in South Africa should be an indispensable reference for those who want to understand the connections between external environmental factors and internal organisational integrity. This excellent book will be of particular interest to government officials and police administrators interested in the development of strong police forces and better police–community relations."

, Professor at the Department of Sociology and Criminal Justice, University of Delaware

"This book presents an in-depth study, describing the complex nature of police integrity in South Africa, which depends on recent social changes and police reforms in the country. The authors’ contributions add a significant value to studies on police integrity and police deviance in young democracies in a timely and critical manner. I recommend it to students, researchers, and policymakers interested in police integrity and the development of democratic policing globally."

, Professor and Head of the Institute of Criminal Justice and Security, University of Maribor