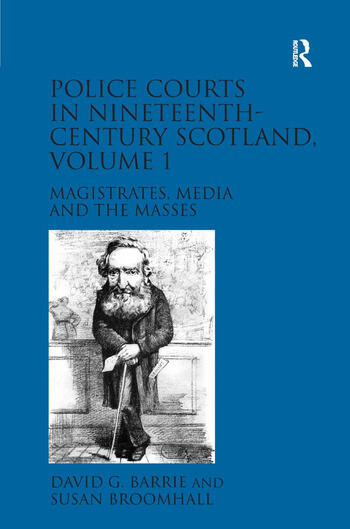 Taking the form of two companion volumes, Police Courts in Nineteenth-Century Scotland represents the first major investigation into the administration, experience, impact and representation of summary justice in Scottish towns, c.1800 to 1892. Each volume explores diverse, but complementary, themes relating to judicial practices, relationships, experiences and discourses through the lens of the same subject matter: the police court. Volume 1, with the subtitle Magistrates, Media and the Masses, provides an institutional, social and cultural history of the establishment, development and practice of police courts. It explores their rise, purpose and internal workings, and how justice was administered and experienced by those who attended them in a variety of roles. Special attention is given to examining how courtroom discourse was represented in print culture, the role of the media in providing a discursive commentary on summary justice, and the ways in which magistrates and the police engaged in a law and order dialogue with the press. Throughout, consideration is given to uncovering the relationship between magistrates, the courts, the police and the wider community, and to charting the implications of the rise of summary justice and the ’police-man’ state for the urban masses (as evidenced through prosecution, conviction and punishment patterns). Volume 2, with the subtitle Boundaries, Behaviours and Bodies, explores, through themed case studies, how police courts shaped conceptual, spatial, temporal and commercial boundaries by regulating every-day activities, pastimes and cultures.

'These two volumes constitute a heavyweight companion study in every sense of the term - except, that is, for the clear, well-argued and accessible text. Carefully researched, based on an impressive range of archival sources, and rooted in detailed knowledge of existing scholarship, Police Courts makes a valuable and important contribution to a hitherto under-researched aspect of criminal justice history. Written by scholars who, intellectually, form a formidable duo, this exhaustive examination of Scottish police courts, their activities and their personnel puts down a bench mark that will be essential reading for historians of England and Scotland who will need carefully to reflect on the study’s arguments and findings and follow up with new research.' Clive Emsley, Open University, UK

'Overall these books are a fantastic achievement. They present a sophisticated and nuanced picture of the role of the lower courts and the part they played not only in implementing the nineteenth century revolution in criminal justice but in making the modern city. They balance an attention to detail with an awareness of broader historiographical and theoretical issues. They are a model for future studies in this area.' Lindsay Farmer in Law, Crime and History (2016)