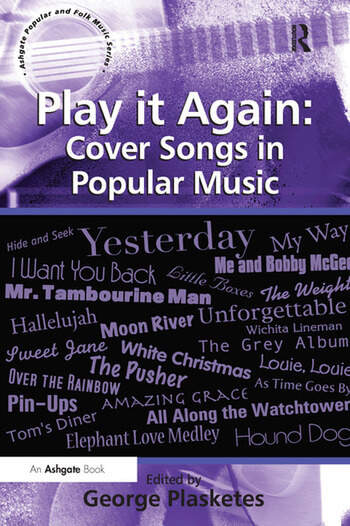 Covering”the musical practice of one artist recording or performing another composer's song”has always been an attribute of popular music. In 2009, the internet database Second Hand Songs estimated that there are 40,000 songs with at least one cover version. Some of the more common variations of this "appropriationist" method of musical quotation include traditional forms such as patriotic anthems, religious hymns such as Amazing Grace, Muzak's instrumental interpretations, Christmas classics, and children's songs. Novelty and comedy collections from parodists such as Weird Al Yankovic also align in the cover category, as does the "larcenous art" of sampling, and technological variations in dance remixes and mash-ups. Film and television soundtracks and advertisers increasingly rely on versions of familiar pop tunes to assist in marketing their narratives and products. The cover phenomenon in popular culture may be viewed as a postmodern manifestation in music as artists revisit, reinterpret and re-examine a significant cross section of musical styles, periods, genres, individual records, and other artists and their catalogues of works.The cover complex, with its multiple variations, issues, contexts, and re-contextualizations comprises an important and rich popular culture text. These re-recordings represent artifacts which embody artistic, social, cultural, historical, commercial, biographical, and novel meanings. Through homage, allusion, apprenticeship, and parody, among other modes, these diverse musical quotations express, preserve, and distribute popular culture, popular music and their intersecting historical narratives. Play it Again represents the first collection of critical perspectives on the many facets of cover songs in popular music.

George Plasketes is Professor of Radio-Television-Film and Popular Culture in the Department of Communication & Journalism at Auburn University, USA.

'From "American Idol" to Weird Al Yankovic, from Japanese enka to mash-ups, Play it Again reveals the many layers of connection to be found in our increasingly recombinant media culture. The fifteen essays in this collection invite us to consider just how prevalent the act of covering is”far beyond its usual association with "copying someone else's song." Indeed, whether as apprenticeship, as tribute, or as sabotage, the phenomenon of covers have penetrated film, television, and the advertising world. Together, the essays in this collection suggest a number of new avenues of inquiry for popular music studies.' Kevin Holm-Hudson, University of Kentucky, USA ’It is timely that cover songs should be treated with scholarly respect. ...Play it Again: Cover Songs in Popular Music deserves a strong readership from undergraduate and postgraduate courses in popular music and popular cultural studies.’ Times Higher Education ’Recommended.’ Choice