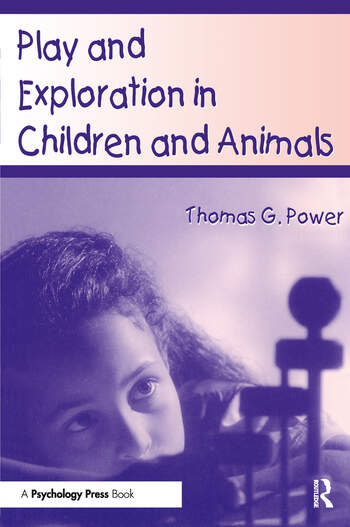 Play and Exploration in Children and Animals

Play is a paradox. Why would the young of so many species--the very animals at greatest risk for injury and predation--devote so much time and energy to an activity that by definition has no immediate purpose? This question has long puzzled students of animal behavior, and has been the focus of considerable empirical investigation and debate.

In this first comprehensive and state-of-the-art review of what we have learned from decades of research on exploration and play in children and animals, Power examines the paradox from all angles.

Covering solitary activity as well as play with peers, siblings, and parents, he considers the nature, development, and functions of play, as well as the gender differences in early play patterns. A major purpose is to explore the relevance of the animal literature for understanding human behavior. The nature and amount of children's play varies significantly across cultures, so the author makes cross-cultural comparisons wherever possible.

The scope is broad and the range multidisciplinary. He draws on studies by developmental researchers in psychology and other fields, ethologists, anthropologists, sociologists, sociolinguists, early childhood educators, and pediatricians. And he places research on play in the context of research on such related phenomena as prosocial behavior and aggression.

Finally, Power points out directions for further inquiry and implications for those who work with young children and their parents. Researchers and students will find Play and Exploration in Children and Animals an invaluable summary of controversies, methods, and findings; practitioners and educators will find it an invaluable compendium of information relevant to their efforts to enrich play experiences.

"Power's book provides a comprehensive synthesis of what is known about biological universals and flexibility related to play, raising important research questions about what processes regulate play behavior and how adults and children use play to construct culture."
—Human Development

"Power's [2000] comprehensive and thorough review of the current literature on play fills an important gap in the child development literature."
—Human Development

"This book is a tremendous achievement. It is the first to truly integrate the bodies of research on animal play and human play, while still respecting the differences. It considers all the major kinds of play--not just the object play and sociodramatic play of children usually studied, but exploratory play, play-fighting, locomotor play, and parent-child play. It pays full attention to the literature on children's play in non-Western societies. Above all, it is a true work of scholarship, thorough in its reviews and original in its synthesis. This will be a benchmark volume for anyone interested in what play is and what importance it may have in animal and human development."
—Peter K. Smith
Goldsmiths College, University of London, England

"Play and Exploration in Children and Animals provides an up-to-date, comprehensive, and interdisciplinary review of comparative and evolutionary studies of many different types of play. The author's caution in generating broad and firm conclusions is refreshing. This well-written book, free of technical jargon, will certainly set the agenda for detailed studies of play as we head into the 21st century. Clearly, play is an important category of behavior that demands careful attention from a broad spectrum of researchers. Biologists, psychologists, anthropologists, sociologists, and other behavioral scientists will find this book extremely useful. What can be more fun than to study and read about children and animals enjoying themselves?"
—Marc Bekoff
University of Colorado, Boulder

"This book provides a unifying evolutionary framework for the study of children's play. In doing so, a large body of literature, which has mostly fallen into two mutually exclusive domains, one human and one nonhuman, is summarized and juxtaposed. Such an analysis helps to identify what is common to all animals that play and what is unique to humans and thus crystallizes the questions that need to be answered. Power's timely study should be essential reading for all those interested in play and the development of behavior."
—Sergio M. Pellis, Ph.D.
University of Lethbridge, Alberta, Canada

Play and Exploration in Children and Animals