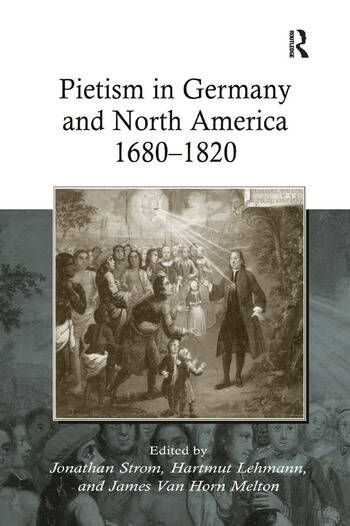 This collection explores different approaches to contextualizing and conceptualizing the history of Pietism, particularly Pietistic groups who migrated from central Europe to the British colonies in North America during the long eighteenth century. Emerging in German speaking lands during the seventeenth century, Pietism was closely related to Puritanism, sharing similar evangelical and heterogeneous characteristics. Dissatisfied with the established Lutheran and Reformed Churches, Pietists sought to revivify Christianity through godly living, biblical devotion, millennialism and the establishment of new forms of religious association. As Pietism represents a diverse set of impulses rather than a centrally organized movement, there were inevitably fundamental differences amongst Pietist groups, and these differences - and conflicts - were carried with those that emigrated to the New World. The importance of Pietism in shaping Protestant society and culture in Europe and North America has long been recognized, but as a topic of scholarly inquiry, it has until now received little interdisciplinary attention. Offering essays by leading scholars from a range of fields, this volume provides an interdisciplinary overview of the subject. Beginning with discussions about the definition of Pietism, the collection next looks at the social, political and cultural dimensions of Pietism in German-speaking Europe. This is then followed by a section investigating the attempts by German Pietists to establish new, religiously-based communities in North America. The collection concludes with discussions on new directions in Pietist research. Together these essays help situate Pietism in the broader Atlantic context, making an important contribution to understanding religious life in Europe and colonial North America during the eighteenth century.

Contents: Introduction: pietism in two worlds, Jonathan Strom; Part I Defining Pietism in the World of Transatlantic Religious Revivals: Pietism in the world of transatlantic religious revivals, Hartmut Lehmann; Some thoughts on pietism in American religious history, Stephen J. Stein; Communication networks as one aspect of pietist definition: the example of radical pietist connections between colonial North America and Europe, D.F. Durnbaugh; Religion in the Atlantic world: the Ebenezer communication network, 1732-1828, Alexander Pyrges. Part II Dissent and Migration: Old World Heritage: Johanna Eleonora Petersen in the context of women's and gender studies, Ruth Albrecht; Homeless minds: the migration of radical pietists, their writings, and ideas in early modern Europe, Douglas H. Shantz; From Jakob BÃ¶hme via Jane Leade to Eva von Buttlar - transmigrations and transformations of religious ideas, Willi Temme; Traveling prophets: inspirationists wandering through Europe and to the New World - mission, transmission of divine word, poetry, Hans-JÃ¼rgen Schrader. Part III Dissent and Migration: New World Confrontations: Heinrich Melchior MÃ¼hlenberg and the pietisms in colonial America, Hermann Wellenreuther; 'Only Brothers should be accepted into this proposed council': restricting women's leadership in Moravian Bethlehem, Beverly Prior Smaby; The evolution of the Bethlehem Pilgergemeine, Katharine Carté Engel; 'Don't teach my Negroes to be pietists': pietism and the roots of the black Protestant church, Jon Sensbach; 'If you want to be the Lord's servant, resign yourself to confrontation': the pietist challenge in early Georgia, Helene M. Kastinger Riley. Part IV New Directions in Research: Halle pietism and the Prussian state: infiltration, dissent, and subversion, Ben Marschke; Pietism, print culture, and Salzburg Protestantism on the eve of expulsion, James Van Horn Melton; 'The hope of better times': pietism and the Jews, Christopher Clark; How to incorp

'This volume makes a valuable contribution to the revisioning of the eighteenth century, and mediates the recent surge in Pietist studies to a wider, Anglophone audience.' English Historical Review 'Much could be said about each of the essays; however, bound together as a volume, they represent an important collection of recent advances in the historical study of Pietist movements. This volume will be of interest to students of religion, theology, as well as social and cultural history alike.' Sixteenth Century Journal '... the volume serves as a valuable guide to the current state of Pietism research... taken together, these essays amply illustrate the crucial significance of Pietism for the shaping of the North Atlantic world and, by extension, of Western modernity itself.' H-Net 'While the essays vary in length and depth, they explore a broad spectrum of topics within Lutheran, Moravian, and radical Pietism in the Old and New Worlds, and they successfully link questions of religion and piety to problems of migration, gender, economic, and political history.' Amerikastudien