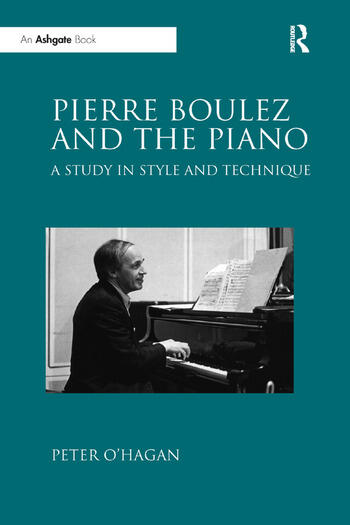 Pierre Boulez and the Piano: A Study in Style and Technique

Pierre Boulez's first piano pieces date from his youth, prior to his studies in Paris with Messiaen, and his subsequent meteoric rise to international acclaim as the leader of the musical avant-garde during the 1950s. His most recent published work is a solo piano piece, Une page d’éphéméride, written some sixty years after his first attempts at composition. The piano has remained central to Boulez's creative work throughout his career, and although his renown as a conductor has to some extent overshadowed his other achievements, it was as a performer of his own piano music that his practical gifts first found expression.

Peter O'Hagan has given performances of various unpublished piano works by Boulez, including Antiphonie from the Third Sonata and Trois Psalmodies. In this study, he considers Boulez's writing for the piano in the context of the composer's stylistic evolution throughout the course of his development. Each of the principal works is considered in detail, not only on its own terms, but also as a stage in Boulez's ongoing quest to invent radical solutions to the renewal of musical language and to reinvigorate tradition. The volume includes reference to hitherto unpublished source material, which sheds light on his working methods and on the interrelationship between works.

CHAPTER 6 The Expansion of Serialism: Structures Deuxième Livre, Chapitre I

Peter O’Hagan is a pianist and writer specialising in contemporary music. He is editor of British Music of the 1990s (Ashgate, 2003), and co-editor of Boulez Studies (2016).

Pierre Boulez and the Piano: A Study in Style and Technique