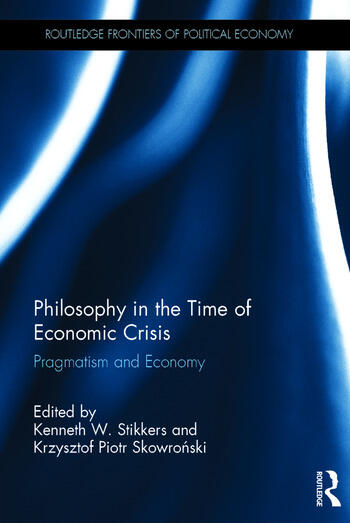 Philosophy in the Time of Economic Crisis: Pragmatism and Economy

For over 2000 years, economics was studied in the West as a branch of ethics, or moral philosophy. Presently, though, few economists and no textbook in economic orthodoxy claim any close connection between economic science and philosophy. However, might the current ‘crises’ in economics, and in the economics profession have their deep roots in the separation of economics from philosophy and ethics?

American pragmatism, among the various contemporary philosophic traditions, lends itself specially to dialogue with economics because of its view of philosophy as an instrument for solving the real, concrete problems of human life, both personal and social. The essays in this volume, drawing heavily on the tradition of pragmatism, suggest that the economic crises of our time (the 2008 collapse of real estate and finance markets) might not be merely technical in nature - that is, the result of faulty applications of economic tools by politicians and policy makers, based up conventional economic models - but also due to the faulty philosophical assumptions underlying those models. These essays suggest that the overcoming of our current economic crises requires that economists once again become moral philosophers, or that philosophers once again engage themselves in economic matters.  In either case, this volume aims to foster dialogue between the two disciplines and in that way, contribute to the improvement of contemporary economic life.

This book is suitable for those who study political economy, economic theory and economic philosophy.

I. The Crisis in Philosophical and Historical Perspective

2. On the Shadow and the Substance: Adam Smith, John Dewey, and the Great Recession, by Michael Schleeter (Pacific Lutheran University, USA)

3. John Dewey: A Philosophy for Times of Crisis, by Matteo Santarelli (Unversity of Molise, Italy)

II. The Narrative and Rhetoric of ‘Crisis’

5. If Philosophers Are So Smart: A Metaphor of ‘Global Economic Crisis’, by Maja Niestrόj (Opole University, Poland)

III. The Economy of Happiness and Desire

6. Mead's Bio-Social Theory of the Self and the Economics of Happiness, for a Pragmatist Philosophy of Economics, by Guido Baggio (Pontifical Salisian University, Rome, Italy)

7. The Hegemony of Finance: Recognition and the Capture of Desire, by Henry Kelly (Trinity College, Dublin, Ireland)

8. Deep Capture:  The Hidden Role of Rationalizations, Psychology, and Corporate Law, and What Philosophy Can Do about It, by Marcin Kilanowski (Nicolas Copernicus University, Torun, Poland)

IV. The Efficiency of Markets

V. Looking Beyond the Crisis

Philosophy in the Time of Economic Crisis: Pragmatism and Economy