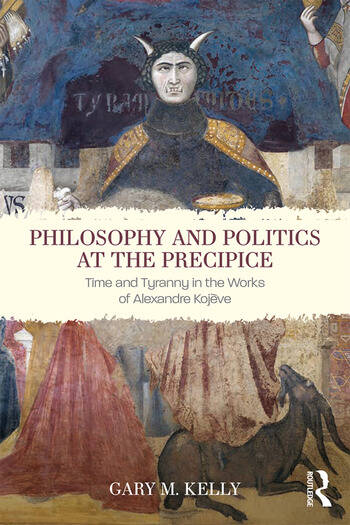 Philosophy and Politics at the Precipice: Time and Tyranny in the Works of Alexandre Kojève

Philosophy and Politics at the Precipice maintains that political philosopher Alexandre Kojève (1901–68) has been both famously misunderstood and famous for being misunderstood. Kojève was famously understood by interpreters for seeing an "end of history" (an end that would display universal free democracies and even freer markets) as critical to his thought. He became famously misunderstood when interpreters, at the end of the twentieth century, placed such an end at the center of his thought. This book reads Kojève again – as a thinker of time, not its end. It presents Kojève as a philosopher and precisely as a time phenomenologist, rather than as a New Age guru. The book shows how Kojève’s time is inherently political, and indeed tyrannical, for being about his understanding of human relation. However, Kojève’s views on time and tyranny prove his undoing for making rule impossible because of  what the book terms the "time-tyrant problem." Kojève’s entire political corpus is best understood as an attempt to rectify this problem.

So understood, Philosophy and Politics at the Precipice provides fresh perspective on the true nature of Kojèvian irony, Kojève’s aims in the Strauss–Kojève exchange, and how Kojève at his best captures a philosophical, phenomenological time, one that marks some of the most dynamic and unique events of the twentieth century.

Headlines have largely erased the notion that history has ended. Philosophy and Politics at the Precipice, on the other hand, provides the philosophical justification for arguing that the end of the last millennium was not an end and that, for his view of time, Kojève remains a thinker for the times ahead.

By Way of Introduction

Chapter 1: Man, Time, and A Man in His Times on the Precipice

The Double Dare from a Modern’s Modern

… from a Modern’s Modern

The Nature and Importance of Time Phenomenology

Self-Worth and the Origin of Kojèvian Time

Kojève’s Time as Related to Space

Sparing the Double Dare from Double Talk: The Plausibility of Kojève’s Reading of Time into Tyranny

Chapter 3: Time Phenomenology In and On Kojève

Temptations in Reading Kojève: Timeliness and the End of Time

A Kitchen in Sokolniki: Contours of the Present Human Time

The Either/Or of the Time-Tyrant Problem

The Case Study of Napoleon

The Legacy of the Time-Tyrant Dilemma: A Kojèvian "Politics" Based on Universality

The Struggle for Possession of the Universal: the Time-Tyrant Problem as the Fulcrum of the Strauss-Kojève Exchange

Chapter 4: Attempt of Kojève’s Thinkers to Resolve the Time-Tyrant Problem

The Importance of Kojèvian Ideas

In a Manner of Speaking: Kojèvian Circularity – the Script of the Dual, the Instantaneous and the Total

Speaking Of and About Master-Tyrants: Kojève’s "Top Down" and "Bottom Up" Response

Audition One: Revelation and the Kojèvian Wise Man

The Wise Man as Revealing

The Wise Man As Revealed

The Wise Man Transformed to Philosopher in the Face of the Master-Tyrant: The Case Study of Socrates and Thrasymachus

Audition Two: the Philosopher’s Role in Dialectic and the Conundrum of Kojèvian Desire in Human Time

Kojève’s Escape from the Time-Tyrant Dilemma: a Renege of the Double Dare Through Encounters with Nature

Chapter 5: In the Shadow of War: The Beginning of Kojève’s Answer to the Time-Tyrant Problem

Wartime and Evolution in Kojève’s Corpus

The Turn in Kojève’s Outline

Practical Implications of Kojève’s Turn in the Outline

The Move Toward a Master-tyrant at Work

Kojève’s Broad Understanding of the Political through the Jurisprudential

Chapter 7: Kojève’s Return to Conventional Politics – at an Unconventional Time

A Reprise: Inside-Out Time Phenomenology in the Post-War Kojève

Politics Beyond Desire for Desire: Time and Kojèvian Authority

The Time of the Introduction Reexamined: A Bifurcated Present to Match a Bifurcated Master-tyrant

Of Wise Men Reconsidered and Reread: The Strauss-Kojève Exchange as a Final Futile Attempt to Pair the Master-Tyrant with a Thinker

Gary M. Kelly is an attorney and political scientist. He has advised over twenty-five developing countries on behalf of multilateral institutions. He has taught political economy and theory and in the United States, Eurasia, and North Africa. His recent research and writing includes work on Kojève, Rousseau, and Gilson.

Philosophy and Politics at the Precipice: Time and Tyranny in the Works of Alexandre Kojève