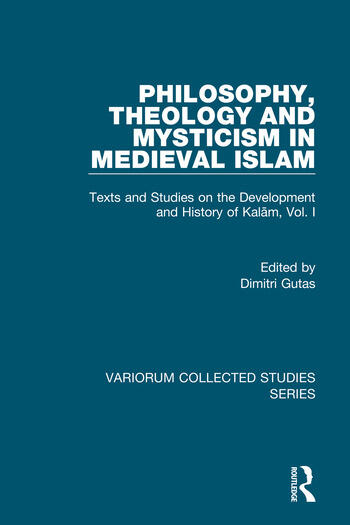 Philosophy, Theology and Mysticism in Medieval Islam: Texts and Studies on the Development and History of Kalam, Vol. I

The first volume of the collected major articles of Richard M. Frank, pioneering student of Islamic theology (kalam), contains fifteen essays. It includes his early studies, classic but inaccessible for many in their original publication, on the text and terminology of Graeco-Arabic translations (De anima, Themistius on the Metaphysics, Plotinus in Syriac, 'anniya) and the terminology of early kalam. Other articles deal with Islamic theology and its early development, especially in its relation to philosophy (in particular the kalam of Jahm ibn Safwan and al-Ghazali), and the text and translation of two short dogmatic works by the mystic al-Qushayri. The collection is prefaced by a fascinating autobiographical memoir which traces the intellectual development of the author and the reasoning that led him, from study to study, to his discovery of the way of thinking of the theologians and to an understanding of the essential core of Islamic theology.

Contents: Foreword; Autobiographical note; Some fragments of Ishaq's translation of the De anima; Some textual notes on the Oriental versions of Themistius' paraphrase of Book I of the Metaphysics; The origin of the Arabic philosophical term 'anniya; The use of the Enneads by John of Scythopolis; Remarks on the early development of the kalam; Reason and revealed law, a sample of parallels and divergences in kalam and falsafa; Currents and counter currents [in the Mu`tazila, Ash`arites and al-Ghazali]; The neoplatonism of Jahm ibn Safwan; Al-Ghazali on taqlid: scholars, theologians, and philosophers; Al-Ghazali's use of Avicenna's philosophy; Meanings are spoken of in many ways: the earlier Arab grammarians; 'Lam yazal' as a formal term in Muslim theological discourse; Two short dogmatic works of abu l-Qasim al-Qushayri, part 1: Luma` al-i`tiqad; part 2: al-Fusul fi l-usul; Index.

Richard M. Frank is Emeritus Professor in the Department of Semitic and Egyptian Languages and Literatures, at the Catholic University of America, USA.

’...the great contribution of this collection is that it makes these very valuable studies accessible to scholars who would otherwise have to spend considerable time and effort in locating some of them. Dimitri Gutas has done a fine job of organizing the articles into relevant themes and topics...Gutas is also to be commended for overseeing the production of the two exhaustive indexes [...] which make the fifteen articles searchable and enhance their usability for scholars of Islamic studies.’ Bulletin of the School of Oriental and African Studies ’Professor Gutas has done an exemplary job of organizing the wide-ranging interests of Frank... The value of this collection is in its gathering of Frank's disparate papers that were published in a wide range of journals that will tax the most well-stocked research library... This volume has the added bonus of having 'an intellectual biography - a memoir' of the author that Gutas has generously provided. This is as important a piece of writing as any that Frank has written, as it serves as 'the glue' that holds these disparate papers together, and gives a nuanced dimension to the volumes as singular body of work... Overall the volume is of immense value for students of Islamic philosophy, theology, and especially Sunni kalam.’ Journal of Islamic Philosophy

Philosophy, Theology and Mysticism in Medieval Islam: Texts and Studies on the Development and History of Kalam, Vol. I