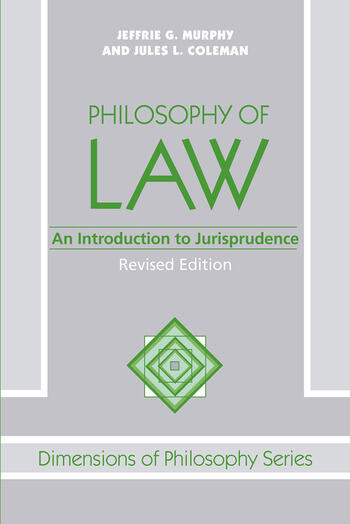 Philosophy Of Law: An Introduction To Jurisprudence

In this revised edition, two distinguished philosophers have extended and strengthened the most authoritative text available on the philosophy of law and jurisprudence. While retaining their comprehensive coverage of classical and modern theory, Murphy and Coleman have added new discussions of the Critical Legal Studies movement and feminist jurisprudence, and they have strengthened their treatment of natural law theory, criminalization, and the law of torts. The chapter on law and economics remains the best short introduction to that difficult, controversial, and influential topic.Students will appreciate the careful organization and clear presentation of complicated issues as well as the emphasis on the relevance of both law and legal theory to contemporary society.

INTRODUCTION: WHAT IS THE PHILOSOPHY OF LAW?1 THE NATURE OF LAW Natural Law Theory, Legal Positivism, Legal Realism The Reemergence of Natural Law, The Attack on Traditional Jurisprudence: Critical Legal Studies and Feminist Jurisprudence, Suggestions for Further Reading, 2 MORAL THEORY A N D ITS APPLICATION TO LAW The Nature of Morality, The Nature of Moral Philosophy and Moral Theory, Utilitarianism and Social Policy, Kantianism, Rights, and Respect for Persons, Moral Philosophy and Constitutional Law: Freedom of Speech and Press, Moral Skepticism and the Limitations of Constitutional Analysis, 3 CRIME A N D PUNISHMENT Why Have the Criminal Law at All? Kantianism and Retribution, Mental States, Excuses, and Strict Liability, Choosing the Proper Punishment, 4 PHILOSOPHY A N D THE PRIVATE LAW Tort Law, Contract Law, 5 LAW A N D ECONOMICS Basic Concepts and Models, Applying Economics to Law, Objections to the Economic Analysis of Law

Jeffrie G. Murphy is Regents Professor of Law and Philosophy and Affiliated Professor of Religious Studies at Arizona State University. He is the author of numerous books and articles on legal and moral philosophy, with a particular emphasis on theories of punishment, mercy, forgiveness, and the moral emotions. 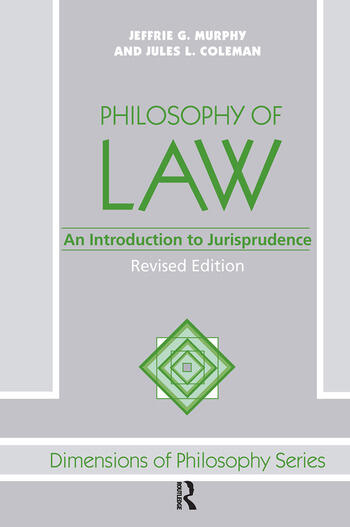 Philosophy Of Law: An Introduction To Jurisprudence