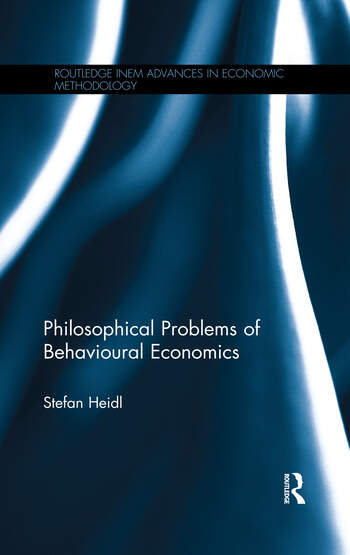 The goal of behavioural economics is to improve the explanatory and predictive power of economics. This can be achieved by using theoretical and methodological resources of psychology. Its fundamental idea is that the relationship between psychology and economics cannot be subsumed under standard philosophical accounts of intertheoretical relations.

argues that behavioural economics is best understood as an attempt to deidealize economic theory guided by psychological research. Behavioural economics deconstructs the model of decision-making by adding different elements. Based on this understanding behavioural economics has a number of tasks: first, it has to identify which economic theory needs to be challenged; second it aims to identify factors which need to be modelled within economic theories of choice and modify the theory accordingly; and finally, it has to create models that explain economic phenomena based on the new theory. This book analyses the different stages of this deconstruction process and shows how the scientific disciplines of economics and psychology are connected by it.

2. The Ontological Status of Economic Preferences

3. Selectionist Arguments against a Deidealisation of Economics

4. Aggregation and the Deidealisation of Economic Theory

7. The Structure of Behavioral Economic Theories

8. Models in Economics: Standard and Behavioral

Stefan Heidl is a lecturer and research associate at the Institute for Philosophy, University of Bonn, Germany.