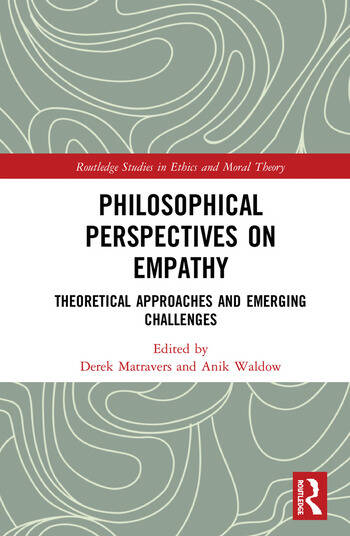 Empathy—our capacity to cognitively or affectively connect with other people’s thoughts and feelings—is a concept whose definition and meaning varies widely within philosophy and other disciplines. Philosophical Perspectives on Empathy advances research on the nature and function of empathy by exploring and challenging different theoretical approaches to this phenomenon.

The first section of the book explores empathy as a historiographical method, presenting a number of rich and interesting arguments that have influenced the debate from the Nineteenth Century to the present day. The next group of essays broadly accepts the centrality of perspective-taking in empathy. Here the authors attempt to refine and improve this particular conception of empathy by clarifying the intentionality of the perspective taker’s emotion, the perspective taker’s meta-cognitive capacities, and the nature of central imagining itself. Finally, the concluding section argues for the re-evaluation, or even rejection, of empathy. These essays advance alternative theories that are relevant to current debates, such as narrative engagement and competence, attunement or the sharing of mental states, and the "second-person" model of empathy.

Part I: Empathy as a Method

2. Empathy: Language, Affect and Cognition in the Discovery of the Past

5. The Object of an Empathetic Emotion

6. What Can We Learn From Taking Another’s Perspective?

7. Sympathy and Projection, and Why We Should Be Wary of Empathy

8. Exploring Enactive Empathy: Actively Responding to and Understanding Others

10. Empathy without Sharing: Empathetic Responsiveness in Psychanalysis and Politics

Derek Matravers is Professor of Philosophy at The Open University. His recent work includes Introducing Philosophy of Art: Eight Case Studies (Routledge, 2013); Fiction and Narrative (OUP, 2014); and Empathy (2017). He directs, along with Helen Frowe, the AHRC-funded project, Heritage in War.

Anik Waldow is Associate Professor of Philosophy at the University of Sydney. She has published articles on sympathy, the role of affect in the formation of the self and associationist theories of thought and language. She is the author of Hume and the Problem of Other Minds (2009).