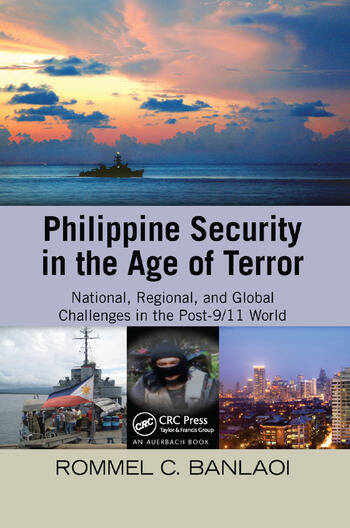 As the twelfth most populous nation, the Philippines’ diverse religious and ethnic population makes it an ideal example of the changing tenet of what is deemed national security—post 9/11. Issues previously considered social or public are now viewed as security issues. Food production is now analyzed in the context of food security and environmental degradation is now a part of environmental security. This broadened perspective is not unique to the Philippines, but—thanks to the island nation’s long struggle with issues of Muslim radicalism, democracy, and globalization—it serves as a model worth studying. And no one is better positioned to take on this study than Rommel C. Banlaoi, Chairman and Executive Director of the Philippine Institute for Peace, Violence, and Terrorism Research.

In Philippine Security in the Age of Terror: National, Regional, and Global Challenges in the Post-9/11 World, Banlaoi illustrates the increasing complexity of the issues. Divided into three sections, the book explores why a nation’s security can no longer be just about its military or only about what is happening within its borders.

The comprehensive approach and coverage within the book reflects the author’s diverse interests as a scholar of politics, security, terrorism, and international relations. More importantly, it documents an intellectual journey that national policymakers across the world need to consider if they hope to achieve the shift in thinking that will promote the well-being of the world’s populations as the strategic centerpiece of any war on terrorism.

Rommel Banlaoi is the Chairman of the Board and Executive Director of the Philippine Institute for Peace, Violence and Terrorism Research and Head of its Center for Intelligence and National Security Studies. He is also currently a Senior Fellow at the Yuchengco Center of De La Salle University, Manila where he heads its Regional Security and Foreign Relations program.

Clearly, Banlaoi is well-versed in Philippine security issues as evidenced by his description of the internal security challenges of the Philippines and institutional framework that has been established to deal with them. The extensively footnoted chapters on radical Muslim terrorism and local government responses to terrorist threats provide detailed descriptions of various Mindanao-based terrorist/insurgency groups and the government's strategy for dealing with them. … a useful starting point for developing a more rigorous analysis of the securitization process in the Philippines … .
—Contemporary Southeast Asia, Vol. 32, No. 2, August 2010