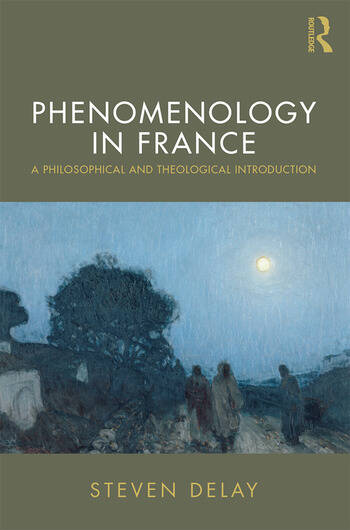 This book is an introduction to French phenomenology in the post-1945 period. While many of phenomenology’s greatest thinkers—Husserl, Heidegger, Sartre and Merleau-Ponty—wrote before this period, Steven DeLay introduces and assesses the creative and important turn phenomenology took after these figures. He presents a clear and rigorous introduction to the work of relatively unfamiliar and underexplored philosophers, including Jean-Louis Chrétien, Michel Henry, Jean-Yves Lacoste, Jean-Luc Marion and others.

is an excellent resource for all students and scholars of phenomenology and continental philosophy, and will also be useful to those in related disciplines such as theology, literature, and French studies.

3. Michel Henry: the Primacy of Life

4. Jean-Luc Marion: the Phenomenology of Givenness

5. Jean-Yves Lacoste: Beyond Earth and World

6. Jean-Louis Chrétien: the Call and the Response

9. The Future of Phenomenology

Steven DeLay is an Old Member of Christ Church, University of Oxford, UK.

"[T]he book is a well-written and provocative work, which makes for a lively reading and which gives much to think." - Francois Raffoul, Notre Dame Philosophical Reviews

"In treating these authors and these subjects DeLay provides clear relief of the established phenomenological tradition coming from Husserl and Heidegger, thereby granting the text a remarkable unity despite covering such a wide range of distinct figures and topics. DeLay is able to clearly frame together the often-intractable development of ideas in this French phenomenological tradition, paying particular attention to the various points of contact, the divergences, the cultivation of specific intuitions, the development of particular concepts, and the emergence of new impulses. DeLay’s text balances two competing aims, the first in addressing the need for more commentary on those figures most productively interrogating the legacy of Heidegger and Husserl, and secondly, to introduce the texts in their own terms, and in their own styles, so that readers can enter into their own distinctive world … In total, we find a noteworthy contribution on two fronts: a compellingly clear account of intellectual history, and a unique contribution to the ongoing work of phenomenology itself." - William L. Connelly, Journal for Continental Philosophy of Religion

"In 1933, Husserl discovered that according to National Socialist criteria he was not a German anymore. It is little known that after a while an American university, Berkeley, offered him a professorship. He even toyed with the idea of emigrating to California. Interest in phenomenology is no recent fact in the United States. Interest in French phenomenology is no recent fact either. Steven DeLay is the heir of a long and distinguished history, and he lives in an academic world where many distinguished scholars have been influenced by their French colleagues. His book was well needed: after many original contributions to phenomenology in the wake of the French reception of Husserl and Heidegger, there was room left for a comprehensive introduction to French figures who have done something to keep phenomenology alive and creative. DeLay has provided Anglophone readers with such an introduction. He has done it thoroughly. And his is the work of a historian of philosophy who is also a promising philosopher in his own right." Jean-Yves Lacoste, University of Cambridge, UK

"Steven DeLay offers a very careful and complete overview of French phenomenology from the 1980s to the present. He shows that - far from being concerned only with parochial issues - this phenomenology is an original and valuable contribution to philosophy in general. One of the great merits of DeLay’s work is to reconsider how French contemporary phenomenology relates to the Anglo-American context, by showing that the lens of a ‘theological turn’ once popularized by Dominique Janicaud - while not being completely misguided - remains nevertheless very partial when accounting for the complexity and innovative power of la nouvelle phénoménologie."

"Steven DeLay's book is not only one of the best introductions to French phenomenology in English, but it also questions the future of philosophy itself. That is why it must be put in all hands, not only for what it gives to understand, but also for what it gives to think. Every philosophy has a present and a future, and it is all the merit of this introduction to really demonstrate it." Emmanuel Falque, Catholic University of Paris, France