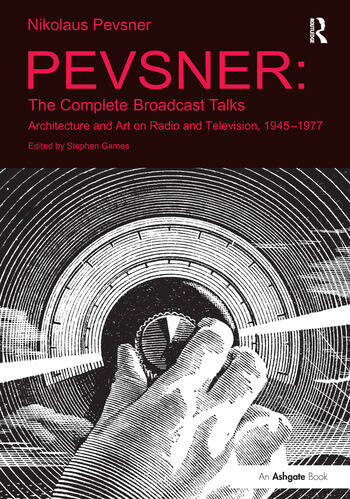 Pevsner: The Complete Broadcast Talks: Architecture and Art on Radio and Television, 1945-1977

This book brings together the surviving texts of the 113 talks on art and architecture that we know of, given by the art historian Sir Nikolaus Pevsner on radio and television between 1945--1977. It includes the seven texts of the 1955 Reith Lectures in their original broadcast form, as well as lectures that Pevsner gave in German (for the BBC in London and RIAS in Berlin) and on the radio in New Zealand. These talks are important as an example of the attempt by the BBC in particular to provide intellectual programming for the mass population. The talks are important for what they reveal about changing tastes in the treatment of the arts as a broadcast topic, as well as offering a case study of the development of one particular historian's approach to a subject that was gaining ground in universities as a direct result of his popularisation of it. They show what topics were thought to be central to the artistic agenda in the mid-years of the last century, whether from an academic or journalistic perspective, and reveal the mode and manner of academic engagement with the public over the period. Forty-six of these talks were published in 2002, on the centenary of Pevsner's birth, in a trade edition. At the time, his reputation as an active force in architectural thinking had long been eclipsed and interest in him had waned. Since then, there has been a turn-around in tastes and Pevsner's role within his chosen field is now being actively studied and discussed by a new generation for whom he is central to an understanding of the 20th century. There is therefore a real need for this book. In addition to containing twice the number of talks as the previous volume, it is supplemented with explanatory introductions, footnotes and citations. It also reveals, as far as this is possible, alternative versions of Pevsner’s texts, as they appeared at different stages in the original production process. As such, this edition can be relied on by academics as scholarly and

Stephen Games is an author and editor. A former documentary maker for the BBC and arts correspondent of The Independent, Stephen's architectural reviews for The Guardian earned him a British Press Award. He has written for the Los Angeles Times and been deputy editor of the RIBA Journal. He was educated at the Central School of Art and Magdalene College, Cambridge. He has recently lectured on architectural history and theory at Kent University, and has taught at Boston University and Temple University, Philadelphia.

’Stephen Games's new compendium of broadcast lecture texts represents an invaluable enrichment of the increasingly diverse literature on the life, career and ideas of Nikolaus Pevsner - one of the focal figures of mid-20th-century visual culture in England. Not just that - but, in conjunction with the forthcoming companion volume, Pevsner at the BBC, it will do much to illuminate the wider interconnections between cultural commentators and the mass media in the era of humanist social democracy that Noel Annan fondly dubbed Our Age�. Those, after all, were years when public discourse on the built environment was still pervaded by high ideals and grand narratives� of Progress and social salvation - in stark contrast with the empty posturing that passes for architectural theory� in today's time of image-led, iconic� nihilism!’ Miles Glendinning, University of Edinburgh, UK ’Conversational, spontaneous, wide-ranging, and often responding to recent travels and encounters, Pevsner's broadcasts reveal a side that does not appear in his more scholarly writings. Reading the transcripts today, they show him reaching beyond the circle of professionals and academics, as part of his mission to bring informed discussion of architecture into the orbit of everyday life.’ Adrian Forty, The Bartlett School of Architecture, University College London, UK 'This volume will appeal to those with an above average interest in art and architecture ... Recommended.' Choice 'Games provides extensive introductory material for each script as well as to the whole collection, which addresses the controversial aspects of Pevsner’s career in great detail'. Cassone 'Here for the first time between covers are the surviving texts of 113 talks on art and architecture given by the greatest of all British architectural historians, Sir Nikolaus Pevsner.' Newsletter of the Ancient Monuments Society ’So what is the value of this collection? Firstly it is a reminder of Pevs

Pevsner: The Complete Broadcast Talks: Architecture and Art on Radio and Television, 1945-1977