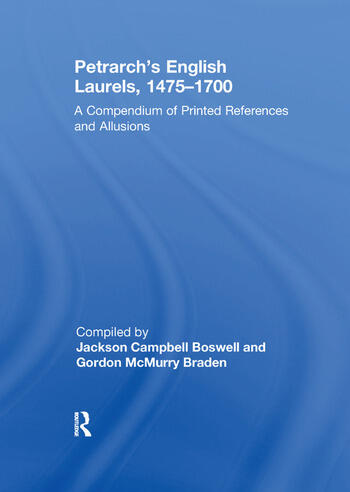 Petrarch's English Laurels, 1475–1700: A Compendium of Printed References and Allusions

The powerful influence of Petrarch on the development of Renaissance vernacular poetry has long been recognized as one of the major factors in early modern cultural history; this work provides a far more comprehensive catalogue of the direct evidence for that influence in England than any yet available. Following the model of Boswell's Dante's Fame in England (1999), it offers an itemized presentation, year by year, of printed citations, translations, and allusions, with complete bibliographical information, quotations of the relevant passages, and brief commentary. The most fully studied aspect of Petrarch's influence, his love poetry as a model for imitation, remains paramount: a model by turns slavishly imitated, ruthlessly mocked, and searchingly reworked, sometimes all at the same time. But the significance of other aspects of his legacy are also documented, with new fullness: notably his Latin prose works-especially his encyclopedic moral treatise On the Remedies of Both Kinds of Fortune, popular throughout the period-and his polemics against the Avignon papacy, which earned him a strong reputation in England as an angry moral prophet and champion of what would become the Protestant cause. The picture here presented provides new texture and complexity for any further discussion of Petrarch in the English Renaissance.

Jackson Campbell Boswell is Scholar in Residence at the Folger Shakespeare Library, USA. Gordon McMurry Braden is Linden Kent Memorial Professor of English at the University of Virginia, USA.

'Were I the librarian of any European or American University or National library I would order Petrarch's English Laurels immediately. It is an important and very accurate reference book filling a gap in European studies. Any major library should keep it on its shelves.' Mario Domenichelli, Prof. of Comparative Literatures, University of Florence, Italy 'Petrarch's English Laurels offers a comprehensive, chronological presentation of the evidence for Petrarch's evolving reception and influence throughout the "long" English Renaissance, 1475-1700. Here is all the evidence scholars need as set forth in the age's printed books for a detailed and accurate analysis of Petrarch's role and reputation during that time. Boswell and Braden excerpt references to Petrarch's life as well as to his writings including summary allusions, quotations, and translations. Generous old-spelling quotations from the primary sources provide full contexts for these excerpts, supplemented by concise, authoritative editorial notes on the authors and works in which they appear. Readers will learn from this work that Petrarch's influence on English love poetry was almost a sideline compared to his influence on such unrelated spheres as Reformation polemic, above all the attack on the papacy, but also moral instruction in general ranging from strictures against dancing to his warnings about second marriages. Petrarch's English Laurels will be mined for evidence in support of a very wide variety of studies in many disciplines, including religious and cultural history, philosophy, literature, and rhetoric.' Steven W. May, Emory University, USA 'This is an excellent scholarly resource, the result of considerable investigation and transcription. Since a hundred years separate the active life of Petrarch from the first printed reference, some indication at least of intervening manuscript references to his works would have been invaluable, although at probably impossible costs in labour and time for

Petrarch's English Laurels, 1475–1700: A Compendium of Printed References and Allusions