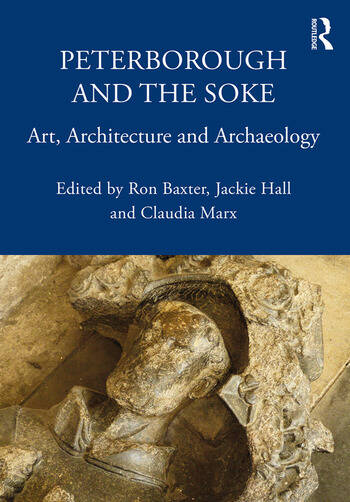 Peterborough and the Soke: Art, Architecture and Archaeology

The British Archaeological Association Conference held at Peterborough in 2015 provided a welcome opportunity for a new analysis of the cathedral’s architecture, sculpture and artistic production, and a reassessment of the relationship between the former abbey, the city and its institutions, and the Soke over which it held sway.

This ambitious volume casts new light on the Roman occupation of the Nene valley, and the rich Anglo-Saxon sculptural and manuscript context that preceded the construction of the present cathedral, as well as exploring the vital Romanesque tradition of the Soke and the essential contribution of the Barnack quarries.

But inevitably the most exciting new disclosures concern the church: its high-quality building campaigns during the 12th to 16th centuries, its abbots’ tombs and the reconstruction of the lost 14th-century High Altar screen from descriptions and loose fragments. Peterborough has attracted the attention of antiquarian scholars since its sacking by Cromwell’s men during the Civil War, and as its secrets are gradually revealed it continues to stimulate the historical imagination.

3. The Anglo-Saxon Abbey of Peterborough: A Review of the Evidence (RICHARD GEM)

4. Anglo-Saxon Sculpture of Peterborough and its Region (ROSEMARY CRAMP)

5. Contexts of Discovery of Roman and Anglo-Saxon Stone (JACKIE HALL)

10. Architecture during the rule of Abbot Benedict (1177‒94) (PETER FERGUSSON)

11. Coming and Going: The Great Gate of Peterborough Abbey as a Zone of Interaction (HARRIET MAHOOD)

12. The Figure Sculpture of the West Front of Peterborough Cathedral and Its Setting (JULIAN LUXFORD)

13. What Is the Subject Carved on the Socle in the West Doorway of Peterborough Abbey? (CATHERINE OAKES)

14. A Few Ancient Recumbent Effigies of Abbots, Not One of Which Occupies Its Original Position (RON BAXTER)

17. The Palm Sunday Procession, from the Peterborough Abbey Consuetudinal, as a Source for Topographical Identification (BROTHER SIMON OF YARWELL WITH INTRODUCTION, TRANSLATION AND NOTES BY T. M. HALLIDAY)

18. The New Building at Peterborough: Questions of Attribution, Date and Status (FRANCIS WOODMAN)

Ron Baxter is an art historian, Research Director of the Corpus of Romanesque Sculpture in Britain and Ireland, and a member of the Fabric Advisory Committee of Peterborough Cathedral. He specializes in the study and recording of medieval architecture and sculpture, especially in England.

Jackie Hall is the archaeologist for Peterborough Cathedral, and also Southwark Cathedral. She specializes in buildings archaeology, especially relating to ecclesiastical complexes, and has a particular interest in building stone and how that relates to different periods and uses. She also works on monuments and loose assemblages.

is an architect and architectural historian. She is Professor of Architectural Conservation and Design at TU Dresden and has been teaching at the University of Cambridge. She also practices as a conservation architect, and has worked on several English cathedrals. Her research interests include 19th-century cathedral restoration and early-20th-century reform movements in architecture.

Peterborough and the Soke: Art, Architecture and Archaeology