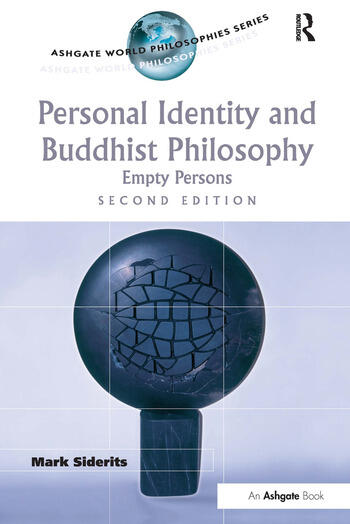 Since the publication of Mark Siderits' important book in 2003, much has changed in the field of Buddhist philosophy. There has been unprecedented growth in analytic metaphysics, and a considerable amount of new work on Indian theories of the self and personal identity has emerged. Fully revised and updated, and drawing on these changes as well as on developments in the author's own thinking, Personal Identity and Buddhist Philosophy, second edition explores the conversation between Buddhist and Western Philosophy showing how concepts and tools drawn from one philosophical tradition can help solve problems arising in another. Siderits discusses afresh areas involved in the philosophical investigation of persons, including vagueness and its implications for personal identity, recent attempts by scholars of Buddhist philosophy to defend the attribution of an emergentist account of personhood to at least some Buddhists, and whether a distinctively Buddhist antirealism can avoid problems that beset other forms of ontological anti-foundationalism.

Preface to the first edition; Preface to the second edition; Introduction; Situating reductionism; Refuting the self; Getting impersonal; Wholes, parts and emergence; Ironic engagement; Establishing emptiness; Empty knowledge; The turn of the true; Empty persons;

Mark Siderits recently retired from the Philosophy Department of Seoul National University, where he taught Asian and comparative philosophy. His research interests lie in the intersection between classical Indian philosophy on the one hand, and analytic metaphysics and philosophy of language on the other. Among his more recent publications are Buddhism As Philosophy (Ashgate/Hackett), Personal Identity and Buddhist Philosophy: Empty Persons (Ashgate) and, together with ShÅ�ryÅ« Katsura, NÄ�gÄ�rjuna’s Middle Way: MÅ«lamadhyamakakÄ�rikÄ� (Wisdom). He has also edited several collections of work on Indian/analytic philosophy.

’Siderits’s fusion philosophy replaces comparative philosophy, but this book transcends even his fusion philosophy.’ Chang-Seong Hong, Minnesota State University Moorhead, USA ’Mark Siderits is one of the few philosophers in the world today who is equally expert in Buddhist philosophy and contemporary analytic philosophy; who is as lucid and penetrating on ethical matters as on metaphysical ones; and who, as a scholar of Buddhist thought, can charitably discuss Abhidharma discourse with as much ease and insight as he can handle the themes of Mahayana philosophy. This book is especially valuable for its balanced treatment of these two major streams of Buddhist philosophy, the first half exploring - and extending - an Abhidharma approach to personhood and psychological reality, and the second half illuminating Mahayana approaches with a rare analytic clarity. Though balanced in its scholarship, the book is also stirringly provocative in its philosophical argumentation. Despite divergences between the two Buddhist traditions, Siderits highlights points of convergence, ones that he supports ingeniously with additional philosophical argument of his own. Already seminal in its first appearance, this second edition significantly refines the arguments and conceptual apparatus that Siderits uses to support his ecumenically Buddhist understanding of life, value and experience.’ Gordon Davis, Carleton University, Canada Praise for the 1st edition: 'Analytic philosophers should be awakened from their East-shunning dogmatic slumber by this seductive synthesis of vintage Buddhism, philosophical ingenuity and analytical rigour. In this path-breaking study in Buddhism-inspired analytic philosophy , Mark Siderits has critically reconstructed the intricate chain of arguments behind Buddhist reductionism and anti-realism about persons. ...Siderits establishes himself as one of those handful of contemporary philosophers of language who can handle Indian and Western materia