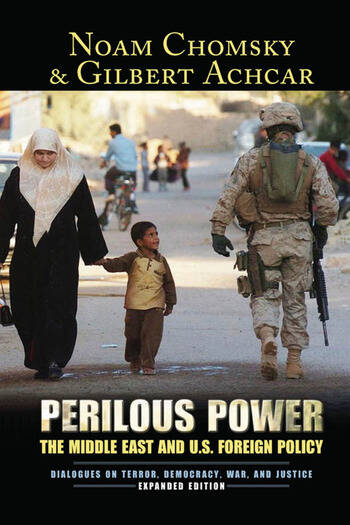 The volatile Middle East is the site of vast resources, profound passions, frequent crises, and long-standing conflicts, as well as a major source of international tensions and a key site of direct US intervention. Two of the most astute analysts of this part of the world are Noam Chomsky, the preeminent critic of U.S, foreign policy, and Gilbert Achcar, a leading specialist of the Middle East who lived in that region for many years. In their new book, Chomsky and Achcar bring a keen understanding of the internal dynamics of the Middle East and of the role of the United States, taking up all the key questions of interest to concerned citizens, including such topics as terrorism, fundamentalism, conspiracies, oil, democracy, self-determination, anti-Semitism, and anti-Arab racism, as well as the war in Afghanistan, the invasion and occupation of Iraq, the Israeli-Palestinian conflict, and the sources of U.S. foreign policy. This book provides the best readable introduction for all who wish to understand the complex issues related to the Middle East from a perspective dedicated to peace and justice.

Preface Chapter 1: Terrorism and Conspiracies Defining Terrorism The Terrorist Threat Responding to Terrorism 9/11 Conspiracies Saddam Hussein's Invasion of Kuwait Chapter 2: Fundamentalism and Democracy Fundamentalism The Saudi Kingdom Democracy in the Middle East Fundamentalism and Democracy Democracy Since the Iraq Invasion Chapter 3: Sources of U.S. Foreign Policy in the Middle East Oil Israel, the Israel Lobby, and U.S. Policy Israel and U.S. Interests Chapter 4: Wars in the "Greater Middle East" Afghanistan Responding to 9/11 Afghanistan Today The United States and Iraq, 2003 Other Major Powers and Iraq The Current Situation in Iraq The Iraqi Insurgency U.S. Policy in Iraq Today What Should the Antiwar Movement Be Calling For? Will Withdrawal Lead to Civil War? The Kurds in Iraq The Kurds in Turkey Secession, Self-Determination, and Justice Syria Iran Chapter 5: The Israel-Palestine Conflict The Legitimacy of Israel Palestinian Say in Any Settlement Going from a Settlement to Lasting Peace Palestinians Within Israel Mizrahim The Palestinian Refugees Efforts to Achieve Peace The Palestinian View of a Settlement Zionism and the Palestinians Israeli Politics Palestinian Politics How Can We Support Justice in Israel/Palestine? Boycotts, Divestment, and Other Tactics Anti-Semitism Anti-Semitism in Western Europe Anti-Arab Racism and Islamophobia Epilogue Gilbert Achcar: The Situation in Iraq Hamas in Power Noam Chomsky: The Israel-Hezbollah-Lebanon Conflict The Israel Lobby The United States and Iran Hezbollah Confrontation with Hamas and Hezbollah Postscript: Two More Years of Crisis Gilbert Achcar: The Iraq "Surge" Lebanon and Israel Palestinian Developments Noam Chomsky: The U.S. Elections and Iraq Iran Israel-Palestine and the United States Notes Index About the Authors