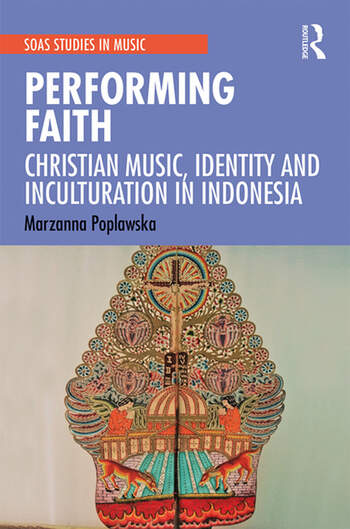 This book is a study of music inculturation in Indonesia. It shows how religious expression can be made relevant in an indigenous context and how grassroots Christianity is being realized by means of music. Through the discussion of indigenous expressions of Christianity, the book presents multiple ways in which Indonesians reiterate their identity through music by creatively forging Christian and indigenous elements. This study moves beyond the discussion (and charge) of syncretism, showing that the inclusion of local cultural manifestations is an answer to creating a truly indigenous Christian expression.

Marzanna Poplawska, while telling the story of Indonesian Christians and the multiple ways in which they live Christianity through music, emphasizes the creative energy and agency of local people. In their practices she finds optimism for the continuing existence of many traditional genres and styles. Indonesian Christians perform their Christian faith through music, dance, and theater, generating innovative cultural products that enrich the global Christian heritage.

The book is addressed to a broad spectrum of readers: scholars from a variety of disciplines – music, religion, anthropology, especially those interested in interactions between Christianity and indigenous cultures; general music lovers and World Music enthusiasts eager to discover musics outside of European realm; as well as Christian believers, church musicians, and choir directors curious to learn about Christian music beyond Euro-American context. Students of religion, sacred music, (ethno)musicology, theater, and dance will also benefit from learning about a variety of indigenous arts employed in Christian churches in Indonesia.

1. Setting the Scene: Christianity and European Influence in Indonesia

3. Gamelan Music in the Church

5. The Cultural Context of Christianity

Marzanna Poplawska holds a Ph.D. degree in Ethnomusicology from Wesleyan University, USA. She has studied and taught in Poland, UK, Indonesia, Ireland, and the United States. Her primary interests encompass the musical traditions of Indonesia, Southeast Asia, Central-Eastern Europe as well as acculturation/inculturation, music and religion, diaspora, and Intangible Cultural Heritage. She is a performer of central-Javanese music and dance. She was the first Polish recipient of Darmasiswa scholarship awarded by the Indonesian government to study Indonesian music, which she studied at the Institute of Indonesian Arts (Institut Seni Indonesia) in Yogyakarta (1995–1997).