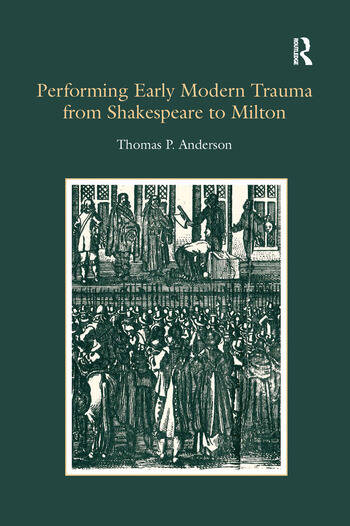 An examination of political and cultural acts of commemoration, this study addresses the way personal and collective loss is registered in prose, poetry and drama in early modern England. It focuses on the connection of representation of violence in literary works to historical traumas such as royal death, secularization and regicide. The author contends that dramatic and poetic forms function as historical archives both in their commemoration of the past and in their reenactment of loss that is part of any effort to represent traumatic history. Incorporating contemporary theories of memory and loss, Thomas Anderson here analyzes works by Shakepeare, Marlowe, Webster, Marvell and Milton. Where other studies about violent loss in the period tend to privilege allegorical readings that equate the content of art to its historical analogue, this study insists that artistic representations are performative as they commemorate the past. By interrogating the difficulty in representing historical crises in poetry, drama and political prose, Anderson demonstrates how early modern English identity is the fragile product of an ambivalent desire to flee history. This book's major contribution to Renaissance studies lies in the way it conceives the representations of violent loss-secular and religious-in early modern texts as moments of failed political and social memorialization. It offers a fresh way to understand the development of historical and national identity in England during the Renaissance.

'A stunningly intelligent, deeply provocative book that intervenes in many different areas of early modern studies simultaneously.' Peter C. Herman, San Diego State University, USA, author of Destabilizing Milton: 'Paradise Lost' and the Poetics of Incertitude 'Anderson's book surveys an impressive array of dramatic and poetic texts... The achievements, as well as implications, of this effort are considerable... Anderson's method represents a fresh approach to historicist readings of early modern literature and that literature's engagement with the past... Anderson's methodology generates a series of original, illuminating comparisons... Anderson's work is striking... engages a wide swath of English Renaissance literature and history with theoretical insight and sensitivity to close detail... this book offers a substantial correction to contextualizing scholarship by tackling the literary presentation of history from a theoretical - principally psychoanalytic - perspective, weaves together an impressive array of texts, and provides original, sharp close readings.' Shakespeare Quarterly ’... each of the book's chapters offers the reader illuminating readings that are as attentive to the literary as to the historical in their working out of the overall argument's logic... Anderson's book will be of interest not only to scholars working in the field of early modern English literature and culture but also to those who are interested in the intersection of trauma theory and pre-twentieth-century history.’ Renaissance Quarterly ’Anderson's highly stimulating book thoughtfully engages with contemporary theory at the same as it shows the author's in-depth knowledge of a range of early modern English authors...’ College Literature ’The book is painstakingly researched and thoroughly supported, providing both comprehensive notes and detailed bibliography... it contributes interesting lines of inquiry into the performance of memory and history in early mode