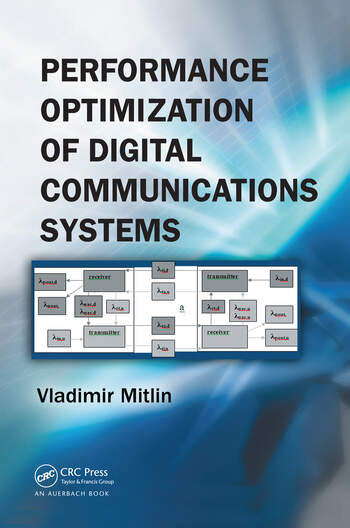 Because fine-tuning the parameters of a system is critical to a developer's success, Performance Optimization of Digital Communications Systems examines particular optimization problems in digital communications, presenting analytical techniques in combination with SystemView and MATLAB® simulations. Consisting of ten chapters, this monograph presents a unique method for determining the quality of a communications channel - a great advantage to any company that uses this method. The book presents a method for the transmission of proprietary data. It also describes the means to reduce the peak-to-average power ratio and introduces optimal phase shifters for multicarrier communication systems.

Vlad Mitlin received an M.Sc. degree in applied mathematics from the Moscow Oil and Gas Institute, Moscow, Russia, in 1981 and a Ph.D. in fluid mechanics from the National Gas Research Institute, Moscow, Russia, in 1987., During 1987 to 1990, he was a research associate with the Earth Physics Institute of the Russian Academy of Sciences. During 1990 to 1994, he was a postdoctoral fellow at the Engineering College of the University of Texas at Austin conducting research in statistical thermodynamics and nonlinear dynamics. During 1994 to 1995, he was a software consultant at Nielsen North America, Schaumburg, Illinois. From 1995 to 1997, he was a manager of fluid mechanics research at TerraTek, Salt Lake City, Utah. From 1997 to 1999, he was a senior software engineer at the Advanced/Functional Test Department of 3Com Corporation, Salt Lake City, Utah. From 1999 to 2002, he was a senior staff member at the Technology Development Center of 3Com Corporation, San Diego, California. From 2002 to 2003 he was chief scientist at the Metric Systems Corporation, Vista, California. Currently, he is an independent consultant., He has published a book (Nonlinear Dynamics of Reservoir Mixtures, CRC Press, Boca Raton, 1993) and about 80 articles in professional publications. His research interests include digital communications, nonlinear dynamics, fluid mechanics of heterogeneous systems, and inverse problems.