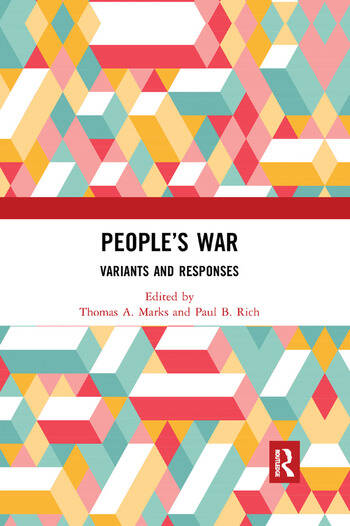 Far from being an anachronism, much less a kit-bag of techniques, people’s war raises what has always been present in military history, irregular warfare, and fuses it symbiotically with what has likewise always been present politically, rebellion and the effort to seize power. The result is a strategic approach for waging revolutionary warfare, the effort “to make a revolution.” Voluntarism is wedded to the exploitation of structural contradiction through the building of a new world to challenge the existing world, through formation of a counterstate within the state in order ultimately to destroy and supplant the latter. This is a process of far greater moment than implied by the label “guerrilla warfare” so often applied to what Mao and others were about. This volume deals with the continuing importance of Maoist and post-Maoist concepts of people’s war. Drawing on a range of examples that include Peru, Colombia, Bolivia, the Caucasus, and Afghanistan, the collection shows that the study of people’s war is not just an historical curiosity but vital to the understanding of contemporary insurgent and terrorist movements.

The chapters in this book were originally published as a special issue of Small Wars & Insurgencies.

Introduction: Back to the future – people’s war in the 21st century

Thomas A. Marks and Paul B. Rich

2. People’s war antithesis: Che Guevara and the mythology of Focismo

5. Critical ingredient: US aid to counterinsurgency in Colombia

6. A double-edged sword: the people’s uprising in Ghazni, Afghanistan

7. The North Caucasus: from mass mobilization to international terrorism

8. Bolivia, a new model insurgency for the 21st century: from Mao back to Lenin

is Distinguished Professor and MG Edward Lansdale Chair of Irregular Warfighting Strategy, College of International Security Affairs (CISA) of the National Defense University (NDU) in Washington, DC, USA. He has authored hundreds of publications, to include the benchmark Maoist Insurgency Since Vietnam, and served as the Oppenheimer Chair of Warfighting Strategy at the Marine Corps University (Quantico), as well as longtime adjunct professor at AFSOS (Hurlburt Field) and the Sherman Kent School (Washington, DC). A former army and US government officer, he has worked as an independent contractor, including for Control Risks of London.